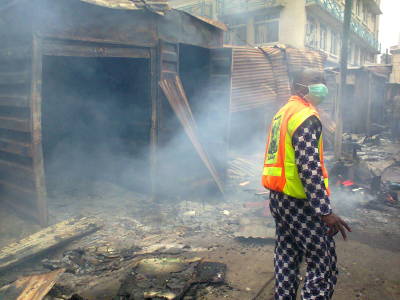 Over 300 shops have been razed down by early morning fire which engulfed the popular Berlin Market on Lagos Island, Lagos, Southwest Nigeria.
The fire was said to have started around 5:30am on Friday, while the cause of the fire is yet to be ascertained.

Clothing materials worth millions of naira were said to have been burnt by the fire while traders were left to count their losses after the fire rages on for hours before the fire service men could put it out.

Director, Lagos State Fire Service, Rasak Fadipe said that most of the shops burnt at the Berlin Market were made of plank and containers, saying that the marketers deal mostly in clothing materials.

He said three fire trucks from Onikan, Ikeja and Sari-Iganmu Fire Stations with combined 30,000 litres of water battled the fire to put it out, with the support of the UBA and Julius Berger fire fighters.

“Emergency responders led by LASEMA have successfully contained the fire from spreading. Clothes worth millions of naira have so far been destroyed by the inferno. No mortality was recorded. The fire has so far been put out,” he said.
A government official who craved anonymity said hundreds of shops housing clothing materials were burnt but that the cause of the fire is yet to be ascertained.

“No casualty is recorded and situation is under control. LASEMA, NEMA State and Fed fire are on ground. Operation was initially hindered by accessibility to the area,” he said.

However, Fadipe disclosed that three warehouses at Kirikiri area have been destroyed by fire and that the fire was still raging as at noon.

He said the fire was intense because the warehouses were housing tyres.