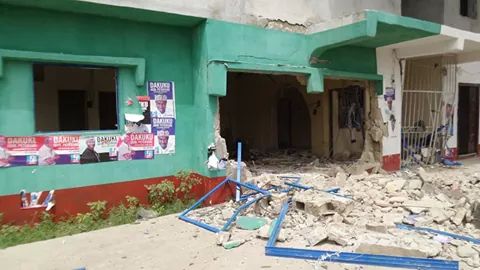 The bombed APC office in Okrika

Another office of the All Progressives Congress has been bombed in Rivers State, a day after police said the campaign convoy of PDP governorship candidate, Nyesom Wike was attacked by unidentifed gunmen.

The office at Ngor, Andoni local council area was dynamited early Friday, the second APC office to be attacked in seven days. On 11 January, the APC office in Abam Ama, Okrika local council was also destroyed with dynamite.

Mr Oromte Erefokuma, Chairman of the party in Andoni local government, said the office was destroyed.

‘’ The APC office at Ngor was attacked by unknown persons in the early hours of Friday. Nobody was hurt, but the office was destroyed,’’ Erefokuma said.

Mr Ahmad Muhammad, a DSP, and public relations officer of the Rivers State police command, confirmed all the attacks.

‘’ We have received a report of the incident. Details are sketchy, but we have commenced investigation into the incident,’’Muhammad said.

Muhammad also said the police had commenced search for gunmen who attacked the campaign team of Mr Nyesom Wike, governorship candidate of the Peoples Democratic Party (PDP) in Rivers, at Abua town, in Abua/Odual Local Government.

He said the gunmen opened fire on the campaign team on Jan. 15 in the afternoon.

‘’ Policemen accompanying the team responded and chased away the gunmen.

‘’Nobody was hurt. No arrest was made and we have commenced serious manhunt for the perpetrators of the act,’’ the police spokesperson said.