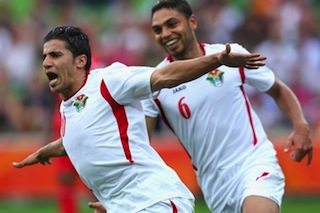 Hamza Aldaradreh scored the first hat-trick of the Asian Cup on Friday as Jordan hammered Palestine 5-1 to keep themselves alive in the competition.

Aldaradreh finished with four goals, helping Jordan end a miserable run of 11 games without a win, but their hopes of advancing still hang in the balance with defending champions Japan to come in their final Group D game on Tuesday.

The striker grabbed his second in first-half stoppage time to leave Palestine with a mountain to climb and completed his treble with a clinical strike in the 75th minute. Adrenalin pumping, he piled on the misery for Palestine with another goal from point-blank range.

But Palestine carved out a little piece of history for themselves from a pulsating match when Jaka Hbaisha smashed home a consolation goal five minutes from time.

The result will give Jordan coach Ray Wilkins a huge lift with the Englishman under fire after failing to arrest the team’s slide since taking over last September.

Wilkins, robbed of star striker Ahmad Hayel after he collapsed from dehydration during a dope test following Jordan’s 1-0 defeat by Iraq earlier this week, endured a nervous opening as Hisham Salhi’s viciously dipping effort was tipped onto the bar by goalkeeper Amer Shafi.

Confident and cohesive where they had been awestruck in their 4-0 thumping by Japan on their Asian Cup debut, Palestine paid the price for their gung-ho approach, however, as Ahmad scored with a peach of a goal against the run of play.

Aldaradreh then ran riot, his whirlwind display making him the competition’s top scorer and giving Jordan a chance of sneaking into the quarter-finals.