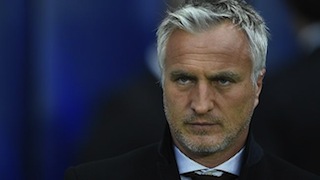 Former France international David Ginola’s unlikely bid to “refresh football” by challenging Sepp Blatter for the FIFA presidency took an early twist on Friday when it emerged he was paid by a bookmaker to stand.

Ginola defended the payment as a “salary” for a “proper job,” telling Sky Sports News: “It’s transparency. It’s the job. Why not? I’m not a football player any more. It’s a proper job.”

“There is no confusion on this — it’s very clear.

“Basically it’s a salary. I’m being paid to do a job to be able to reach the first target, which is (gaining the backing of) five associations, plus doing the campaign next to it and towards the end of May.”

If Ginola is to have his name on a ballot paper, he needs the support of at least five member countries –something many pundits feel is an unachievable goal.

And the former Newcastle and Tottenham Hotspur favourite’s cause was not helped when, under questioning from journalists at a news conference in London, he was unable to name a single member of global governing body FIFA’s executive committee.

Earlier Friday, in an appeal for public support, Ginola said on his Twitter account: “I am standing for FIFA president and I need you on my team.”

“It is time that football was refreshed,” Ginola told the Sun tabloid. “We have to be brave and deal with what is going on in this game we love.”

There are doubts whether Ginola will even be allowed to stand, let alone unseat Blatter.

As well as gaining the support of five associations, candidates must have played an active role in football administration for two of the past five years — whether Ginola’s consultancy work for French third tier club Etoile Frejus St Rafael counts is unclear.

However, Ginola invited fans and other groups to join ‘Team Ginola’, with his campaign already backed by pressure group ChangeFIFA.

“I’m standing because like you, I love football,” said Ginola in a video posted on the teamginola.com website.

“Whether you are on the terraces or on the pitch we all know that the FIFA system isn’t working,” he added.

Potential candidates have until January 29 to put their names forward. The FIFA Congress with the election will be held in Zurich in May.

Blatter, 78, who has been at the top of FIFA since 1998, is widely expected to secure a fifth term in office.

After moving to England from Paris Saint-Germain in 1995, Ginola played for several Premier League clubs.

Renowned for his model good looks and flowing hair, as much as his football skill, Ginola — capped 17 times by France — was named England’s Footballer of the Year in 1999, the same year he helped Spurs win the League Cup.

Since retiring as a player, Ginola has worked as an actor and model but has retained an interest in football as a television pundit and through involvement with clubs in Asia and France.

He also campaigned for England’s unsuccessful bid to stage the 2018 World Cup, which attracted a mere two votes in the 2010 ballot of FIFA members.

FIFA has been mired in corruption claims relating to the bidding for hosting the 2018 and 2022 World Cups, set to take take place in Russia and Qatar respectively.

United States lawyer Michael Garcia, asked by FIFA to look into the bidding procedures for both tournaments, dramatically quit as the organisation’s ethics investigator last month.

He resigned after losing an appeal challenging findings by FIFA chiefs that cleared Russia and Qatar to stage the next two World Cups.