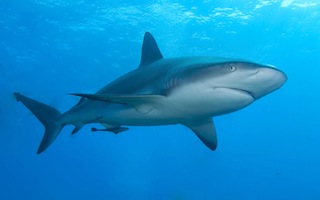 A teenage boy was taken to hospital Friday after being bitten by a shark he was filming off Australia’s east coast as another beach remained shut for a week over repeated shark sightings.

The 17-year-old, named in local media as Sam Smith, was spearfishing off Mollymook, 230 kilometres (140 miles) south of Sydney, when he was bitten on the hand after attempting to stab the shark to “scare it off”, his friend said.

Luke Sisinni said the pair were shooting video clips while spearfishing when they spotted the animal, with Smith swimming down to film it.

“He said it spun around and started coming for him, so he stabbed it with his spear to try and scare it off, but it just went ballistic and bit him,” Sisinni told the Ulladulla Times, adding that the shark was about 1.5 metres (4.9 feet) long.

A New South Wales Ambulance spokeswoman said the teenager was taken to hospital in a stable condition.

The incident came as beaches off the city of Newcastle, 400 kilometres north of Mollymook, were closed for a seventh consecutive day after lifeguards spotted large sharks close to the coast attacking dolphins.

“We often see sharks herding schools of baitfish… but to have large sharks in the environment attacking other creatures in the middle of the day close to shore is not something we see.

“Dolphins are not small — they’re bigger than people.”

Sydney’s Bondi Beach was briefly closed in early January after a shark sighting.

Swimmers were also ordered out of the water at Bondi in November after a shark was spotted, which followed the discovery of a great white shark carcass in nets set up offshore to protect bathers.

Beaches across Sydney and New South Wales state have been partially netted since 1937.

The last shark fatality in Australia was in late December when a 17-year-old boy was attacked while spearfishing in the country’s southwest.

It was the second fatal mauling that month after another teenager died in an attack while swimming off Port Douglas in the northeast.