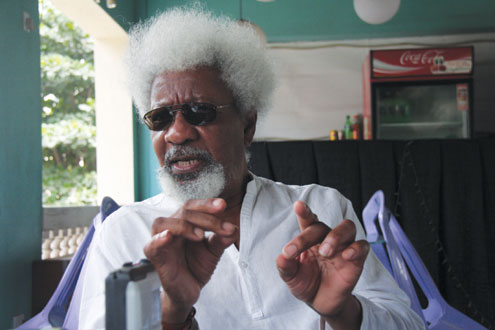 Nobel laureate, Professor Wole Soyinka, has lashed out at fraudulent election campaigners purporting that he issued a statement endorsing a candidate contesting the forthcoming election.

In a statement titled ‘Identity Thieves And The 2015 Election Peace Accord’, Soyinka commended the Abuja Peace Accord signed by presidential candidates including the two leading contestants, President Goodluck Jonathan of the Peoples Democratic Party (PDP) and General Muhammadu Buhari of the All Progressives Congress.

He said the peace pact  “is a positive step in the direction of democracy, for which I must commend the efforts of those seasoned interventionists, Emeka Anyaoku and Kofi Annan. Adhered to with good will and sincerity, it should ensure a wholesome space for future elections, and pre-empt further violence. It might even come close to what the democratic ideal should be, as canvassed by others, including Lagos Governor, Babatunde Fashola a few years ago – a people’s fiests!”

The Nobel laureate said he was, however, disappointed that the communiqué makes no reference to the violence done to members of the electorate whose identities are stolen, abused and debased during this exercise.

“It is rapidly becoming commonplace to encounter totally fictitious statements, even entire interviews published and attributed to unsuspecting authorship. This criminal proceeding has even involved the cloning of media mastheads to which non-existent interviews are then attached. To render it in local parlance, this is political 419, and of the most despicable brand.”

“While it would be unjust to place direct responsibility on the contestants, one must stress that they also have a moral responsibility to denounce these dirty tricksters in the strongest terms, even in their own interest. The resentment inspired in victims of such cowardly conduct cannot but impact on their own political image. The media must also protect itself by taking necessary measures against such unprincipled confusionists. It is the democratic right of every citizen to know exactly who is saying what on issues that affect their political choices,” he stated.

Soyinka further stated: “Let me thus seize the occasion of the Abuja accord to state categorically that I have never made a statement endorsing any presidential or governorship contestant. All such attributions are fabrications by faceless, often self-appointed agents of deception, and should be publicly pilloried. Whenever I choose to declare support for a candidate – as is my electoral right – I shall ensure that I deploy a medium that places my authorship beyond dispute.”