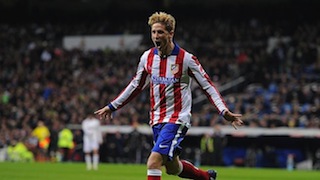 Fernando Torres scored his first Atletico Madrid goals in eight years as the La Liga champions dumped holders Real Madrid out of the Copa del Rey 4-2 on aggregate after a 2-2 draw at the Santiago Bernabeu on Thursday.

Sergio Ramos pulled a goal back for Real, but Griezmann and Torres repeated the trick seconds into the second-half to restore Atletico’s lead.

Fresh from winning the third Ballon d’Or of his career, Cristiano Ronaldo ensured the home side at least salvaged a draw on the night, but they have now failed to beat Atletico in five meetings this season.

Atletico will face Barcelona in the last eight after the Catalans completed an 9-0 aggregate win over Elche as goals from Jeremy Mathieu, Sergi Roberto, Pedro Rodriguez and Adriano sealed a 4-0 victory on the night at the Martinez Valero.

Torres was only starting due to an illness suffered by Mario Mandzukic in the day before the game, but had by far his biggest impact since returning to the Spanish capital.

“I am very happy. It was a game in which we had to feel comfortable due to the result in the first-leg and the early goal allowed us to play the game we wanted,” Torres told Canal Plus.

“The tie was never in danger. We didn’t have to sweat it out.”

Meanwhile, Real boss Carlo Ancelotti was left to lament the defensive errors that undid much of his side’s fine attacking play in the first hour.

“I am delighted with how the team played in the first-half. You can’t play better,” said the Italian.

“The worry doesn’t come from not taking our chances because we played with pace and intensity. The worry comes from the defensive mistakes we made.”

Ronaldo paraded the Ballon d’Or in front of an adoring full house at the Bernabeu prior to kick-off.

However, it took just 46 seconds for Atletico to silence the home fans as Griezmann broke down the left and squared for Torres to turn home his first Atletico goal since May 2007.

Real then laid seige to Atletico goal in search of the four goals they needed to progress to the last eight.

However, Atletico’s second choice ‘keeper was at fault when the hosts levelled after 20 minutes as he got nowhere near Toni Kroos’s free-kick and Ramos gratefully headed into an empty net.

Mario Suarez made a desperate clearance from just in front of his own goal line to prevent Ronaldo giving Madrid the lead and Oblak made a smart low save from Marcelo as the visitors held on till half-time.

And incredibly Atletico struck again within a minute of the restart after half-time in similar fashion as Ramos gifted the ball to Griezmann, who fed Torres and he cut inside Pepe to slot home his second goal of the night.

The former Liverpool and Chelsea striker could even have had a hat-trick moments later as he wriggled past Ramos inside the area, but Griezmann took the loose ball from his teammate and smashed a shot just wide.

Ronaldo restored parity on the night for Carlo Ancelotti’s men when he stooped to head in Bale’s cross from the left nine minutes after the break.

Benzema had one final chance to set up a grandstand finish, but he blasted over on the volley from close range to ensure Madrid’s winless streak against Diego Simeone’s men continues.