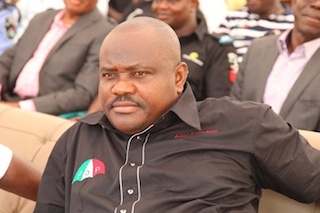 Nyesom Wike, the governorship candidate of the People Democratic Party (PDP) narrowly escaped death on Thursday afternoon as he was caught in a cross-fire between armed hoodlums and security operatives at in the palace of the traditional ruler of Oda Abua, King Kalay Obugeh, at Abua/Odua Local Government Area in Rivers state.

Wike along with members of his campaign team and some supporters were in Abua to pay a courtesy call on the traditional rulers as part of activities to flag-off his governorship campaign in Abua/Odua when the hoodlums began shooting sporadically from a nearby bush.

Wike and his supporters were holed up in the palace of the traditional ruler for about 45 minutes that the exchange of gunfire between the armed hoodlums and the security operatives attached to Wike lasted.

There was a reinforcement from police stations including military formations in the area. Wike, however, continued with his rally at Abua after the combined team of security operatives successfully repelled the armed hoodlums.

Reacting to the siege, Wike called on the police to investigate the incident and make sure that those behind the attack were brought to justice. He alleged that the attack was politically motivated to deter him from campaigning in Abau/Odua Local Government Area of the state.

“I enjoin the police to fish out those behind this dastardly attack. I tell you, we know those who are involved in this. We shall go after them. They will not get away. The commissioner of police must have to find out those that carried out this attack this afternoon”.

“You cannot do that here when I have come to Abua to campaign and come to Port Harcourt to rest. They must face justice. Wherever they are, they must face justice. The former chairman of Abua/Odua Local Government Area, Hon Udi Odum is involved. The current chairman of the Caretaker Committee of Abua/Odua Local Government, Gift Igoma, is involved. Tell them I am coming after them. They will never run away”.

“Look at this beautiful local government being ravaged by insecurity. It is the business of the government to protect lives and property of the people. But what have their own government done? Give us the opportunity and we will restore peace in this community.”

However, in a swift reaction to Wike’s allegation, Odom, a chieftain of the All Progressive Congress, APC, in Abua/Odua Local Government Area stated that the incident was instigated by the PDP to give the APC and its leaders in the local government a bad name.

The former local government chairman explained: “What is happening is essentially a cult war between Icelanders and Greenlanders who are largely PDP members. I am not a member of the PDP. We are currently involved in a rigorous political campaign for our party here.”

Odum alleged: “The day we held our rally here I told our supporters that their aim is to frame me up and arrest me so that it will be easy for them to win Abua/Odua. And I told our members and supporters that even if they arrest me, the only thing they should do for me is to come out and vote en masse for the All Progressives Congress, APC.”

“What happened today is a cult war. As for me, I don’t have anything to do with cultists. So, they should go and ask themselves what really transpired. The caretaker committee chairman of Abau/Odua local government, Ogoma, also dissociated himself from the incidence, saying, “it looks like a clash between rival cultists to me. I am not a cultist, so I am not in a position to say what they fighting over”.

Meanwhile, the state Chairman of PDP Felix Obuah has accused APC as brains behind the attack.

In a statement signed by Jerry Needam, the media aide to the chairman claimed that the party are in possession of evidence that APC was behind the attack.

At the time of the report the state police command was yet issue a statement on the incident.