Agbaje got facts wrong on budget: Fashola says at Ikorodu 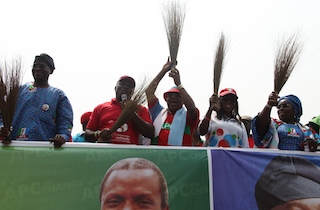 The campaign train of the governorship candidate of the All Progressives Congress (APC) in Lagos State, Mr. Akinwunmi Ambode landed in the ancient town of Ikorodu on Saturday, 17th January, 2015 with the leadership of the party assuring Lagosians in general and Ikorodu people in particular of continuation of its performance in the state.

Led by the state Governor, Babatunde Raji Fashola, SAN, the campaign train arrived to a warm reception from the mammoth crowd who have been waiting eagerly for the Governor and the APC candidate.

Speaking at the event, Governor Fashola described the Peoples Democratic Party (PDP) governorship candidate in the state, Mr. Jimi Agbaje of being ignorant on issues of governance.

“The PDP candidate said a few days ago that only three percent of the state budget is allocated to education. This revelation shows that this man does not know anything about governance and does not even study the budget of the state he aspires to govern. He should come and learn from us. We have been well tutored in art of governance by Asiwaju Bola Ahmed Tinubu and we are delivering the goods to the people of Lagos State,” the Governor said.

According to Fashola, apart from the fact that 16 percent of the budget is allocated to the education sector, there are other education-related allocation in other ministries.

Fashola advised the people to vote for Ambode because he has experience in governance and has proven to be capable.

“This man worked with me for six years and he was excellent. When their party (PDP) unjustly and illegally seized money belonging to Lagos council, it was Ambode who managed our finance successfully ensuring that our newly created councils survived. I was managing the legal aspect with Professor Yemi Osinbajo while Ambode was in charge of finance and the result was the survival of the councils and the resounding success of grassroots governance you are witnessing today in Lagos State,” Fashola said.

Ambode on his part, assured that he will build on the remarkable achievements of Fashola to make life better for Lagosians.

“For the past 15 years, Lagos has been run on the path of excellence. Asiwaju Bola Ahmed Tinubu laid a solid foundation of infrastructure development on which Babatunde Raji Fashola, SAN, has built and is still building durable and remarkable structures. We will continue from where Governor Fashola might have stopped with desire to continue the administration of excellence in Lagos,” Ambode, former Accountant General of the state, said.

Ambode assured further that he will work hard to protect, consolidate and improve on the solid infrastructure development of the state.