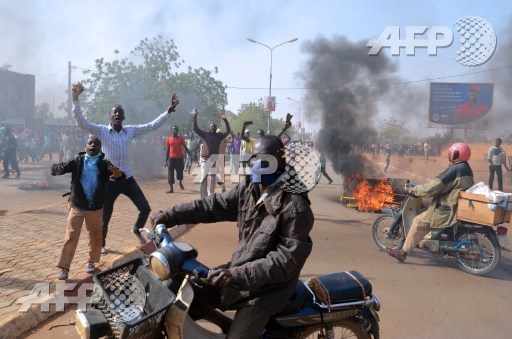 At least two churches were torched in Niger’s capital Saturday as protests raged on against the publication of a Prophet Mohammed cartoon by the French weekly Charlie Hebdo, an AFP correspondent on the scene reported.

Around 100 helmeted riot police stood in front of the Niamey cathedral at midday, protecting it from a crowd of stone-throwing youths. Earlier, police fired tear gas to disperse some 1,000 youths in front of the city’s grand mosque and AFP witnessed protesters in several parts of the city armed with iron bars and clubs.

The protest started yesterday, with four people killed as police clashed with a crowd that attacked a French cultural centre and set churches ablaze.

Protesters in the country’s second-largest city of Zinder in the south set French flags ablaze and attacked Christian shops with clubs and Molotov cocktails, while police responded with tear gas.

Three civilians died, including two who were shot by police during an attack on their station, interior minister Hassoumi Massaoudou said on state television.

A police officer was run over and killed, while 45 other people sustained injuries.

“Zinder experienced a quasi-insurrectional situation, a spontaneous protest of a criminal nature,” said Massaoudou. “I would like to reassure Christians that the state is here to defend those living in Niger at all costs,” he said.

in Russia’s Muslim North Caucasus region of Ingushetia, around 15,000 people on Saturday rallied against Western publications that insult the Prophet Mohammed, authorities said, in the wake of the Charlie Hebdo attack in France.

The crowd gathered for the officially sanctioned meeting in the regional capital Magas to protest “against cartoons of the prophet, Islamaphobia and insulting the beliefs of Muslims,” the local government’s press service told AFP.

Regional head Yunus-Bek Yevkurov described the publication of caricatures of the Prophet as “state extremism on the side of several Western countries” in a statement addressed to the protest.

“Instead of decisively condemning these destructive steps, the political authorities in the West are trying to set people of different religions and nationalities against each other,” the statement published on the local administration’s website said.

Russia’s media watchdog on Friday warned publications that printing cartoons of the Prophet Mohammed was against the country’s law and ethical norms.

Media and communications ombudsman Roskomnadzor said that publishing the caricatures could be qualified as “inciting ethnic and religious hatred” and punished under anti-extremism laws.

Many newspapers and magazines around the world reprinted cartoons of the Prophet Mohammed by Charlie Hebdo, whose Paris office was attacked by Islamist gunmen on January 7, leading to the deaths of 12 people.