I'm hitting some of my best form ever, says Federer 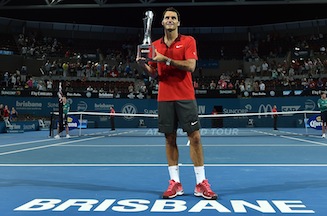 Roger Federer said Saturday he was hitting some of the best form of his life in an ominous warning as the Swiss great guns for an 18th Grand Slam title.

The four-time Australian Open champion shows no signs of slowing down despite approaching his 34th birthday this year, winning 73 matches and five titles in 2014.

He began the 2015 season by winning the Brisbane International and said he was in good shape as he chases his first Grand Slam crown since Wimbledon in 2012.

“I mean, I would hope that over the years I’ve always improved,” he said at Melbourne Park ahead of the Australian Open, where he is seeded two behind Novak Djokovic.

“I think I’m serving more consistent and stronger than I ever have. That’s my opinion. I definitely think the (new) racquet has helped me with that as well, a little bit.

“But, you know, my concentration I do believe is there, better than it’s ever been, at least I hope it is, because I feel over time you always want to improve.

“I think my backhand is working better than it has in the past as well. The question is confidence, forehand, movement.”

Federer said he wasn’t convinced yet that he was in his best form ever, but it was getting close to his golden years when he was almost unbeatable.

“Clearly when I was winning almost everything, everything was so gold that nobody was even questioning anything,” he said.

“Maybe if there were different opponents, different times, it would have changed. But for that particular time, I was playing exactly the way I needed to. I had to adjust my game a little bit over the years.

“I feel I’m playing very well. If it’s the best ever, I’m not quite sure,” he added.

He showed in Brisbane by beating big-serving Milos Raonic, one of the new generation threatening the old guard, that he can still beat the best of the youngbloods.

Whether he can still do so for seven potential five-set matches in two weeks and add to his grand slam tally remains to be seen.

His desire to keep winning is unquestinable. Federer revealed that he took just eight days off during the off-season, determined to have his body in good order for the 2015 season and the opening Grand Slam of the year.

He said his real break would come after the Australian Open, when he will reassess how much he will play this year.

“I need a bit of a break after this because the year end was short,” he said.

“In a way, it’s not so bad. Usually you start the Australian Open not quite knowing where your game’s at. But because I didn’t take that much time off, I got right back into practice.”