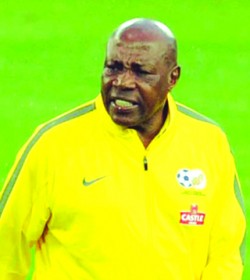 Ghana and Senegal get the ball rolling at the 15,000-capacity Neuvo Estadio de Mongomo, followed by Algeria against South Africa.

And with 21 of 29 Cup of Nations champions making a winning start en route to glory, the importance of securing maximum first-round points cannot be exaggerated.

Group C, based in eastern Equatorial Guinea town Mongomo, is arguably the strongest since the competition was first staged 58 years ago.

All four contenders for two quarter-finals places have been touted as potential successors to non-qualifiers Nigeria as African champions.

The rival coaches have impressive pedigrees, too. Christian Gourcuff, who succeeded Bosnian Vahid Halilhodzic as Algeria handler after the World Cup, has guided top-flight clubs in his native France.

Poker-faced Ghana boss Avram Grant steered Chelsea to the 2008 Champions League final, which they lost on penalties to Manchester United.

And if South African Ephraim ‘Shakes’ Mashaba is less well-known, his 10-match unbeaten run since taking over Bafana Bafana (The Boys) last August speaks for itself. Gourcuff is wary, Grant pragmatic, Giresse concerned and Mashaba upbeat ahead of the opening matches.

“We disregard the judgments of those who make us favourites,” stressed Gourcuff.

“There is quality in our squad, but there are also conditions that we must adapt to.”

Grant was typically down to earth: “It is not just a tough group for Ghana, but for every team. All four are capable of lifting the trophy, but only two can reach the quarter-finals.”

Giresse expressed off-field reservations: “Our hotel is not good and that can affect the behaviour of players and impact on performances.”

Mashaba said: “I told my players to fear no rival because we have no reason to feel inferior to anyone.”

South Africa are dedicating their campaign to former goalkeeper and captain Senzo Meyiwa, who was murdered during a house robbery near Johannesburg last October.

Key factors in determining who qualifies are likely to include mental toughness in alien conditions and how players adapt to a pitch laid only this month with grass flown in from Europe.