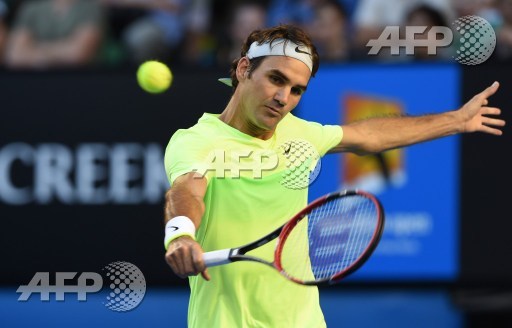 Roger Federer made it win number 1,001 as he joined Grand Slam rivals Rafael Nadal and Andy Murray in the second round at the Australian Open on Monday.

The Swiss legend won in straight sets over Taiwan’s Lu Yen-Hsun, but was embroiled in a tussle in the final set before prevailing 6-4, 6-2, 7-5 on Rod Laver Arena.

Federer, who has a record 17 Grand Slam titles but hasn’t won a major since Wimbledon 2012, has yet to lose in the first round in Melbourne at his 16th visit.

Chasing a fifth Australian Open crown, he joined 14-time Grand Slam winner Nadal and two-time major champion Murray in the next round where he will face Italian Simone Bolelli.

“I’m very pleased to make this one here tonight. Winning first round, it’s always a bit of a relief. So it was nice to get 1,001 here now tonight,” Federer said.

Nadal, a beaten finalist to Stan Wawrinka last year, turfed out Russian Mikhail Youzhny in an uncomplicated straight sets victory, while Murray began a campaign hoping to end the heartbreak of three runners-up finishes in Melbourne.

Spanish world number three Nadal was delighted with his straight forward win over Youzhny, a former US Open semi-finalist, and will next play American qualifier Tim Smyczek.

Youzhny was considered a testing first-up opponent as the Spaniard searches for matches to work his way into the men’s draw.

But the third seed only conceded one break point on his serve, while claiming six service breaks on the Russian in a convincing win.

Nadal has had only seven matches since Wimbledon last July due to ongoing back and wrist injuries and an appendectomy.

His lack of match fitness was apparent in Qatar this month when he was humiliated in the first round by German Michael Berrer, a qualifier ranked outside the top 100.

Murray, who is bidding to become the first player to win the Australian Open after losing three finals in Melbourne, paid tribute to former junior world number one Bhambri.

While the 22-year-old Indian was the lowest-ranked player in the men’s draw at 317, Murray was effusive about his future prospects.

Murray said that Bhambri was “way better than ranked 300 in the world.”

The Scot, who has been working for the last seven months with two-time Grand Slam winner and coach Amelie Mauresmo, was pleased with the state of his game ahead of his next challenge against Australian Marinko Matosevic.

The Bulgarian, 23, at the vanguard of the new breed of younger players, impressed with his all court coverage and groundstrokes and will next face Slovakia’s Lukas Lacko.

A semi-finalist at Wimbledon and a quarter-finalist in Melbourne last year, Dimitrov ruthlessly put away the 90th-ranked German-Jamaican.