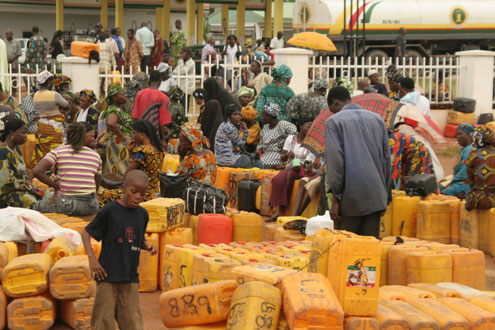 The Nigerian National Petroleum Corporation (NNPC) has initiated a scheme aimed at getting kerosene to consumers across the country at the regulated price of N50 per litre.

This is contained in a statement issued on Sunday in Abuja by the Group General Manager, Group Public Affairs Division, of the corporation, Mr Ohi Alegbe.

It said the scheme ‘Kero Correct’ initiative’ was also aimed at cutting off the several layers of middlemen who made it difficult for the end user to enjoy the subsidy on the product.

The statement said that the Executive Director, Commercial, of the Pipeline and Products Marketing Company (PPMC), Mr Frank Amego, announced the initiative at a one-day workshop in Abuja.

It said the workshop that was organised by the NNPC was to enlighten some Non-governmental Organisations (NGOs) and volunteers engaged to help monitor the sales of the product at NNPC Mega and affiliate stations across the country.

He observed that though kerosene was the most subsidised product, Nigerians had not been enjoying the subsidy.

He said this was because of the long arbitrage system involved in its distribution and retailing, and diversion of the product by marketers to the construction industry where it was used for blending bitumen.

“The Kero Correct initiative is thus designed to distribute and sell kerosene directly to end users from NNPC Retail mega and affiliate stations across the country at the government-regulated price of N50 per litre to ensure effective control,” he stated.

He said the scheme which would be officially launched soon, would involve the distribution of a total of 1,500 trucks of kerosene across NNPC Retail’s mega and affiliate stations across the country.

This, he said, was to ensure that each consumer gets at least 25 litres of the product over the next three months.(NAN)
IAA/AMY