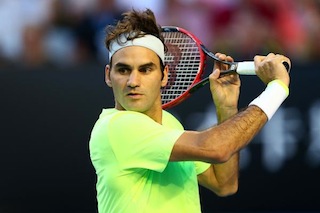 Roger Federer returns with a back end against Lu Yen-Shun

Swiss world number two Roger Federer had a tussle before dispatching Taiwan’s Lu Yen-Shun in straight sets at the Australian Open on Monday.

Federer, who is gunning for his fifth title at Melbourne Park, won 6-4, 6-2, 7-5 and will play Italian Simone Bolelli in the second round.

The 17-time Grand Slam champion reeled off the opening two sets in just over an hour but found more resistance from the 47th-ranked Lu in the third.

The breakthrough came in the 11th game when Federer held three break points on Lu’s service and took the game when the Taiwanese overhit a forehand.

Federer served it out for the match, protecting his record of never losing a first-round match in 16 appearances in Melbourne.

“I thought it was played at a really good level, it was a tough match and I had to step it up,” Federer said.

“I’ve played him a few times so I knew what he can do and he didn’t disappoint.

“It’s early in the season and it’s tough to get rhythm, especially in the first round, but this court plays nice and we had some great rallies so it was a nice match.”

Federer has reached the semi-final stage at his last 11 Australian Opens.