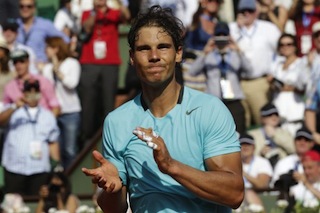 Rafael Nadal eased past Russian Mikhail Youzhny in straight sets to successfully negotiate the opening hurdle at the Australian Open on Monday.

The Spanish world number three, recovering from injury, downed Youzhny 6-3, 6-2, 6-2 in 1hr 50min and will next play either Australian Luke Saville or American Tim Smyczek in the second round.

The one-time US Open semi-finalist was considered a testing first-up opponent as Nadal searches for matches to work his way into the men’s draw.

But he only conceded one break point on his serve, while claiming six service breaks on the Russian in a convincing win.

The 14-times Grand Slam winner missed the end of last year due to appendicitis and has also struggled with ongoing back and wrist injuries.

Nadal has had very few matches since Wimbledon back in July.

His lack of match fitness was plain to see in Qatar this month when he was humiliated in the first round by German Michael Berrer, a qualifier ranked outside the top 100.

British number one, Andy Murray, aiming to end his heartbreak run at the Australian Open, overcame India’s Yuki Bhambri in his opening match Monday to set up a second-round encounter with volatile local Marinko Matosevic.

Murray, who is bidding to become the first player to win the Australian Open title after losing three finals in Melbourne, kicked off this year’s campaign with a straight sets win.

The Scot emerged a 6-3, 6-4, 7-6 (7/3) winner in 2hr 13min on Margaret Court Arena, but paid tribute to former junior world number one Bhambri, who is getting the finishing touches at the famed Nick Bollettieri Academy in Florida.

While the 22-year-old Indian was the lowest-ranked player in the men’s draw at 317, Murray was effusive about his future prospects.

“I thought it was a tricky match. He played very close to the baseline on that court,” Murray said.

“He was coming forward a lot. Even when I was hitting good returns, he was changing the direction of the ball very quickly and coming to the net.

“He played well up at the net. He had good hands, solid volleys and made it tough.”

Murray added that Bhambri was “way better than ranked 300 in the world.”

“He missed five or six months last year through injury. I would imagine by the end of this year he would definitely be around a hundred in the world, if he stays injury-free,” he said.

Murray, who has been working for the last seven months with two-time Grand Slam winner and coach Amelie Mauresmo, was pleased with the state of his game ahead of his next challenge against the unpredictable Matosevic before a home crowd.