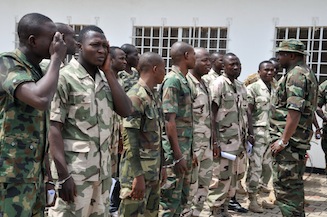 Nigeria has ordered a brigadier general and 21 other army officers to face a court martial over alleged sabotage in the war against Islamist militant group Boko Haram, two military sources told Reuters on Tuesday.

The charges were not specified.

One source said the case opened on Monday at the Ikeja Military Cantonment in Lagos and would last over a week.

Elements of the Nigerian military have long been suspected of colluding with Boko Haram, which killed an estimated 10,000 people last year in its battle to revive a medieval caliphate in Nigeria, Africa’s biggest energy producer.

In a separate, unrelated move, the prosecutor of the International Criminal Court in The Hague said she was looking into alleged mass-killings by Boko Haram, and promised to charge those responsible for any atrocities.

Nigerian President Goodluck Jonathan said last May the Sunni jihadist group had “infiltrated … the armed forces and police” and this is the first time that senior army officers have been put on trial for offences relating to Boko Haram.

Besides the brigadier general, 14 colonels, a major, a second lieutenant and five captains were arraigned.

“The officers are being prosecuted for offences they committed during the ongoing war against Boko Haram insurgents in the northeast of the country,” a military source said.

In December last year, 54 soldiers were sentenced to death following a secret trial for conspiracy to commit mutiny. The army said the soldiers disobeyed a direct order while facing insurgents in the northeast.

Twelve soldiers were also sentenced to death for mutiny in September last year after the military said they attempted to kill their commanding officer.

Morale is extremely low among foot soldiers in Nigeria’s northeast, where poorly equipped and underpaid troops face a determined foe, which currently controls an area the size of Belgium.

After a blood-soaked 2014, killings have continued apace this year, with a string of suicide attacks, some believed to have been carried out by young children.

Boko Haram fighters also overran the military base and town of Baga, on the shores of Lake Chad, on Jan. 3. The militants killed scores, with the military putting the death toll at 150, while some local officials put it as high as 2,000.

ICC prosecutor Fatou Bensouda said the attack on Baga, as well as recent suicide attacks, were a “disturbing escalation”.

“The intentional targeting of civilians, affecting thousands of women, children and men, cannot be tolerated,” she said in a statement. “Nobody should doubt my resolve, if need be, to prosecute those individuals most responsible.”

The global war crimes court has the task of investigating and prosecuting the most serious international crimes if local authorities are unable or unwilling to do so.

It has been examining the Nigerian violence with a view to opening a possible investigation since 2010.