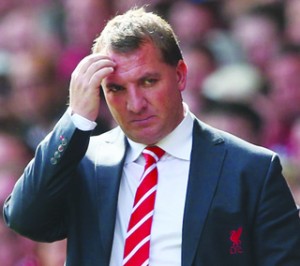 Brendan Rodgers has called on Liverpool to continue their recent resurgence in tonight’s League Cup semi-final first leg against Chelsea.

Rodgers found himself under increased scrutiny at Anfield following an indifferent start to the season.

However, Liverpool have now lost just one of their last 14 games in all competitions and are unbeaten in eight following their defeat at Manchester United in mid-December.

The Liverpool boss was delighted after Saturday’s 2-0 win at Aston Villa, but insisted there is still room for improvement ahead of Chelsea’s visit to Anfield tonight.

“There has been a lot of hard work, the players have got confidence now in the way of working and they have been performing very, very well,” Rodgers said.

“There’s a lot of improvement left in this team and group. But we’re building towards the future here at the club. We have been progressing very well. You will always be looking to improve, no matter how well you are doing. It’s the challenge when you work with young players; you saw the youthfulness in the team on Saturday.

“We obviously had a bump in the road in the early part of the season. But in this period, the team is performing at a good level – defensively strong and playing some wonderful football. It’s pleasing, but we have to keep improving.”

Rodgers will be under no illusions as to the scale of the task facing Liverpool, though, with Chelsea  who beat Derby County in the last round, looking imperious for much of the campaign.

Mourinho’s side have scored 51 goals in their 22 top-flight fixtures so far this season, 20 more than eighth-placed Liverpool and hammered Swansea City 5-0 away on Saturday.

Chelsea also have fond recent memories of going to Anfield, having won 2-1 there in November just six months after all-but ending Liverpool’s 2013-14 Premier League title dreams with a famous 2-0 victory.

Liverpool skipper Steven Gerrard is likely to be restored to the starting XI after missing Saturday’s win at Villa, with Glen Johnson and Adam Lallana also approaching full fitness.