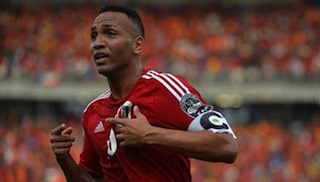 Equatorial Guinea have lodged an official complaint with Africa Cup of Nations’ organisers CAF claiming a conspiracy was behind their disallowed goal in the opening 1-1 draw with Congo Brazzaville.

Skipper Emilio Nsue’s lob in the 74th minute was disallowed for offside by African Referee of the Year Bakary Papa Gassama from Gambia.

Television replays later showed it was a poor decision and the Equatorial Guinea football federation (Feguifut) alleged on the government’s official website that this was a plan by the referee to stop the hosts from reaching the last-eight of the tournament.

The Feguifut statement said experts had reviewed the video repeatedly and suggested it should have been allowed.

“Feguifut officials have studied the video and they have listened to the views of sports experts to reach a conclusion that it was unfair and it is probably a gang-up by the referee,” read the statement in part.

On Wednesday, Equatorial Guinea will take on Burkina Faso, who lost 2-0 to Gabon at the weekend, in their second Group A run-out.