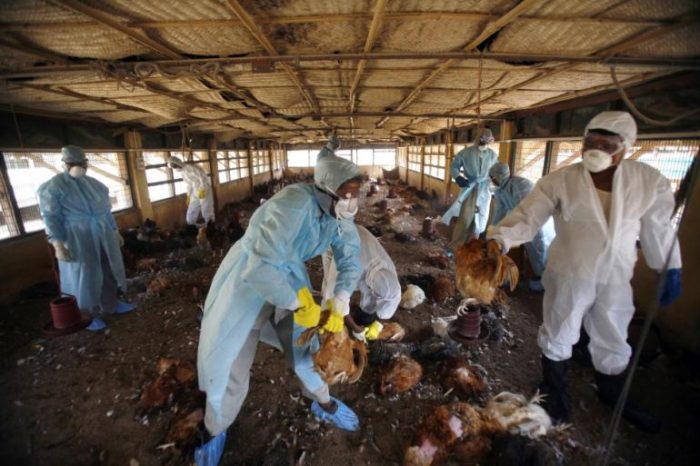 FILE PHOTO: Culled birds being carried away in a poultry.

Thousands of chickens have been culled in southern Nigeria after the discovery of bird flu in some poultry farms, the local health authorities said on Tuesday.

State government officials in the financial capital, Lagos, and the oil city of Port Harcourt, said they had ordered the cull to prevent the spread of the disease.

Lagos State agriculture commissioner Gbolahan Lawal said birds were found to be infected in two locations, in the south of the city during the Christmas and New Year festivities.

“The bird samples were sent to the National Veterinary Research Institute in Vom, Plateau State, and they were unfortunately found positive for the H5 strain of avian influenza,” he added.

The affected farms were quarantined and there have been no reported cases since, he said, warning poultry farmers and sellers to report any high death rates of birds.

In Port Harcourt, 435 kilometres (270 miles) to the southeast, the Rivers State government said it had killed “hundreds of birds” in a farm hit by the virus.

Agriculture commissioner Emma Chinda said the authorities received a report on January 14 that a farm may have been infected and laboratory tests later confirmed the presence of the virus.

“On the basis of that, we had to take necessary steps. Apart from quarantining the farm, we had to depopulate the birds in the farm to stop further spread,” Chinda added.

Officials said there was no indication the outbreak in Africa’s most populous country was the H5N1 strain, which has killed more than 400 people worldwide since it first appeared in 2003.

The World Organisation for Animal Health said: “The Nigerian authorities are investigating and monitoring the situation and they will report the updated information in their next follow-up report.”