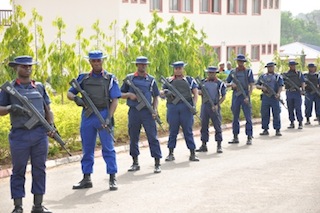 The Nigeria Security and Civil Defense Corps (NSCDC) in Jigawa on Tuesday said it arrested a 30-year-old man for allegedly stealing eight goats.

The state NSCDC Commandant, Mr Muhammad Gidado, told NAN in Dutse that the suspect was a resident of Azarawa village in Babura Local Government area of the state.

Gidado said that the suspect allegedly stole the goats from Achiya village in the same local government area but was apprehended in Aujara village of Jahun Local Government.

The commandant said the suspect was arrested after he failed to give satisfactory explanation of the origin of the goats.

According to him, preliminary investigation reveals that the suspect is among a gang terrorising residents of the area and stealing their animals.

Gidado also announced the arrest of a suspected cattle rustler after series of complaints from communities in Guri and Birniwa Local Government Areas over persistent cattle rustling.

The commandant said the man was apprehended following intelligence reports on his movement in the area, while another suspect, believed to be his accomplice was on the run.

Gidado said all the suspects would be prosecuted as soon as investigation was concluded, and reaffirmed the corps resolve to flush out criminals in the state.