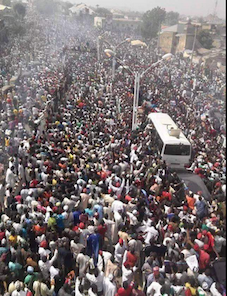 The mammoth crowd that received Buhari train in Kano

Over a million people came out today to receive Maj. General Muhammadu Buhari, the All Progressives Congress presidential candidate and the campaign team to Kano, northern Nigeria’s largest city.

The rally, which held at the Sani Abacha Stadium in Kano, saw the largest crowd yet gathered in support of any candidate.the streets were lined with supporters who came to catch a glimpse of the presidential hopeful, Buhari.

Presenting the party’s candidate to the enthusiastic supporters on the ground, Tambuwal said, “I want to tell you that God is with us, for He has given us Buhari who will end corruption in Nigeria…. If you come out and vote for us, by God’s grace, we will achieve all we have set to do.”

Buhari, nearly overwhelmed by the mammoth gathering, slowly made his way to the stage and addressed the supporters in Hausa, reaffirming his commitment to restoring security, power supply, education and infrastructure. He also spoke on the vital importance of collecting permanent voter cards and ensuring they defended their votes. “Ensure you stay behind and defend your votes,” he said to an uplifted audience who chanted in return, “Sai Buhari! Baba oyoyo!”