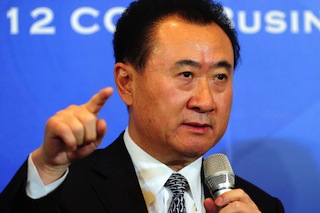 The deal was worth 45 million euros ($52 million) the real estate tycoon’s Wanda Group said on a verified account on China’s Twitter-like Sina Weibo.

It will provide “all-round support for the development of Chinese football”, the statement said, adding that both sides will spend 30 million euros on a youth training centre in Madrid to foster young talent, including players from China.

Wang is number 42 on Forbes magazine’s list of the world’s richest people, with a fortune estimated at $18 billion, and was named as China’s second-wealthiest man last year. The flotation of one of his firm’s subsidiaries may have since propelled him into first place.

He is a diehard football fan and Wanda became a household name across China after Wang bought a Dalian football club in 1994, renamed it after the firm and transformed it into the strongest team in China.

But Wang sold Dalian Wanda in 2000 after he became disillusioned with widespread corruption in the Chinese game at that time.

More recently Wanda has been looking to diversify away from the real estate sector — which is facing considerable challenges in China — by investing in an ever-expanding portfolio of companies including cinema chain AMC and yacht builder Sunseeker.

Atletico, last year’s La Liga champions, have racked up debts in recent years despite their success on the field.

Xinhua said Wanda Group is currently funding a youth training project which sent 90 young Chinese footballers to Spain, with the number expected to reach 180 by 2017.

“What we are doing is to raise the level of Chinese game,” Wang was cited by the news agency as saying.

“Hopefully, three to five among those 90 young players will play for top European clubs in the future and in five years, Spain-trained players will fill the Chinese team in the Asian Cup,” he added, referring to the continental championship, which is currently being played in Australia.

The two sides will collaborate on setting up three football schools in China, the Wanda statement said, and Atletico may tour China later this year.