One dies, 5 vehicles burnt in clashes between PDP-APC fans 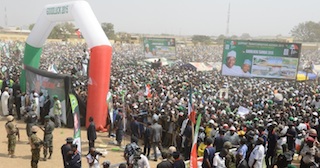 The crowd that attended President Jonathan's rally in Kano

Police in Kano, northwest Nigeria have confirmed the death of one person and burning of five vehicles when political thugs loyal to the All Progressive Congress, APC and the Peoples Democratic Party, PDP, clashed at Hotoro quarters on Wednesday.

The incident occurred around noon at a time when President Goodluck Ebele Jonathan’s campaign rally was on at Polo Ground and General Muhammad Buhari was addressing a World Press Conference on the issue bordering on his WASCE certificate at Government House.

P.M.NEWS reports that Hotoro Quarters is located far away from the venue of the PDP rally.

He said the police are investigating the incident to ascertain the remote and immediate cause.