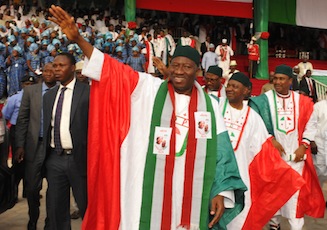 The Peoples Democratic Party (PDP) on Wednesday condemned Tuesday’s attack on its presidential campaign team in Katsina by suspected supporters of All Progressives Congress (APC).

This is contained in a statement issued by the National Publicity Secretary of the party, Mr Olisa Metuh, in Abuja.

The APC has similarly condemned the attack saying violence of any kind is totally unacceptable to the party.

In a statement issued in Lagos on Wednesday by its National Publicity Secretary, Alhaji Lai Mohammed, the party said President Jonathan should be free to campaign anywhere in the country without hinderance.

PDP’s Metuh said that the attack was a clear indication that the APC was not ready to relent on its desire to attain power through violence.

This, he said, was in spite of the peace pact signed by all presidential candidates and their political parties on Jan. 14, in Abuja.

He warned that PDP would no longer tolerate acts of violence on its members.

“This attack on the President of the Federal Republic of Nigeria and our presidential candidate, clearly shows that APC was never committed to the spirit of the Abuja peace accord,’’ he said,

He recalled that the accord was signed in the presence of prominent Nigerians and international personalities and wondered why it was not being obeyed by some parties and their supporters.

Metuh stressed that it was unfortunate that while PDP and other parties were busy ensuring that their members and supporters remained committed to peaceful electioneering, the APC had been doing otherwise.

He alleged that APC had been hatching plots to unleash violence on PDP candidates and members.

He, therefore, called on Nigerians, friends of the country and lovers of democracy to rise in condemnation of the ‘’dangerous phenomenon’’.

According to him, what is happening now clearly demonstrates that the comments and declarations by APC leaders that Nigeria will be thrown into chaos and bloodshed if it loses the February elections are real.

Metuh commended what he described as ‘’maturity and the ever-peaceful disposition’’ of Jonathan and the leaders of the PDP ‘’even in the face of provocation’’.

“The irony which we wish to place on record is that APC has successfully completed its campaigns in the South-South, including Bayelsa, the home state of President Jonathan without any incident,’’ he said.

He reiterated the resolve of the PDP to ensure peaceful and credible general elections, and assured that the votes of the people would exclusively determine who would emerge as leaders in the general elections.