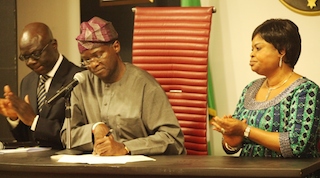 Coming on the heels of an Executive Order reducing cost of land transaction in Lagos, the State Governor, Mr. Babatunde Fashola SAN, Wednesday again signed into law another bill seeking to further ease processes in land transactions in the state, saying it is the responsibility of government to make land transactions easy for the prosperity of the people.

Titled, “A Law to Consolidate All Laws Relating to Registration of Land in Lagos State”, the law seeks, according to the Attorney General and Commissioner for Justice, Mr. Ade Ipaye, “to enable Lagosians have easy access to register their proprietary interest in Land seamlessly”, among others.

In his remarks shortly before signing the bill into law, Governor Fashola noted that it was important to secure land as an asset because of its importance to the prosperity of people, adding that in basic economics, land is a very important asset to capital formation.

Reiterating that it is the responsibility of government to maintain a registry of titles to land that has the highest level of integrity, the Governor said to the extent that land registration helps to create the divisions of land registry, it decentralizes the process and therefore improves access to land.

Governor Fashola, who noted that Western nations prospered by the way they have registered and titled all land assets, said the enabling law greatly enhanced the process of land registration such that a prospective land buyer would not need to see anybody but just go to the registry and know whether or not he should buy that land.

“So you don’t need somebody to come and tell you the history of how the land evolved from 20 families and one owner, once you go to the library registry you will see all the transactions there and your lawyer would be able to advise you whether to go on or not to go on”, the Governor said adding that it would also save a lot of time in getting transactions concluded.

The law, he said, would also strengthen the hand of government in the administration of the Land Use Act adding that his administration has even started issuing certificate of title to farmers which, according to him, “would form part of the bulwark of titles that would come under the scope of these harmonized laws.”

Advancing further reasons why the law was necessary, Governor Fashola said access to loans by farmers would be assisted through the law, adding that one of the reasons why farmers could not get small loans “in spite of all the work that has been done” was that banks tell them that they don’t have collateral although the farmers are sitting on land which is not in the structured form that the bank would take it from them.

“But once you have a reliable register and they say they have C of O, they can check and the banks can lend them money against that asset and anybody who wants to use that asset in a joint venture knows that it is a secure title,” the Governor said, adding, “and this is where again the job of the registrar of titles is a very important job that must be done with the highest level and measure of integrity.”

Recalling that he signed an Executive Order reducing the cost of land transaction in the state recently, the Governor noted, “Of course our electronic C of O is part of the bulwark of the titles that come here. What we do here is consistent with our reforms and attempt to improve land administration and ease of doing business continuously.”

The Governor thanked the Attorney-General and Commissioner for Justice, Mr. Ade Ipaye and members of the State House of Assembly for enhancing the formulation and passage of the bill adding that he had no difficulty in signing the bill into law “for its many informative initiatives and the fact also that it is consistent with the position which we have already taken that the Land Use Act in itself is not the problem of land access as a law.”

According to Governor Fashola, “What has been a challenge, as I have argued, is the way the Act is administered and if we continue to administer land transactions the way we were doing it 50 years ago without being mindful that the population has grown, that demands for land services has grown and that there is need for automation and reforms in the land administration system, then we will not be diagnosing the problem appropriately.”

On other things his administration has done to reform land administration processes, Governor Fashola, who noted that “automation and the use of technology are the defining issues here”, added, “whereas in some other parts of the country the process produces only a dozen or so land permits or applications, we are doing thousands per day in Lagos. So those methods of response clearly would not take us there.”

The Attorney-General also introduced the new Registrar of Titles in the Lagos State Land Bureau in the person of Mrs. Modupe Osho-Adebiyi.