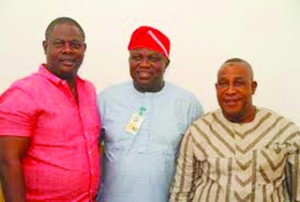 Top Nollywood practitioners, Adebayo Salami, Yinka Quadri and others in the Yoruba movie industry, have expressed their support for the All Progressives Congress, APC, governorship candidate of Lagos State, Akinwumi Ambode.

The support was expressed recently during a courtesy visit by actors and actresses led by the former ANTP president, Adebayo Salami and Yinka Quadri among others.

It was learnt that the group visited the governorship candidate in his campaign office located at Gbagada area of Lagos where they pledged their support for Ambode’s political ambition.

In his address during the visit, Ambode also expressed his delight and appreciation over the visit and promised to live up to his billings when he is elected as the next governor of Lagos State in the coming general elections.