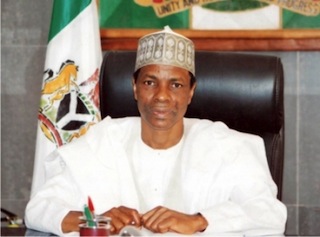 Sokoto PDP women supporters demonstrated some rebellion today as Amina Sambo, wife of the vice-president spoke at a ceremony to distribute some items to them.

Mrs Sambo was midway in her speech when the deputy governor of the state, Alhaji Mukhtar Shagari arrived with the women breaking into chants of “Sai Mai Ruwa”, Sai Mai Ruwa!

Shagari a former PDP governorship aspirant lost to Abdallah Wali. He protested to the national body of the party, in vain.

When Mrs. Sambo found that the women continued to eulogise Shagari, she had to abandon her speech and yield the podium for deputy governor.

As soon as Shagari was invited the entire women even modified their chants: ‘Sokoto sai Mai Ruwa ‘, ‘Sokoto Sai Shagari’, meaning Sokoto is for Shagari.

The Deputy Governor while addressing women called on them to vote for President Goodluck Jonathan in next month’s general elections.

He commended the wife of the vice president for initiating the projects aimed at improving the lot of women in the state.

He said that project will go a long way in enhancing job opportunities for the teeming unemployed women in the state.

Shagari appealed to the beneficiaries to utilize the materials giveno to them in enhancing the socio-economic and political growth of the state.

Mrs Sambo had earlier informed the gathering that the projects was initiated to better the lot of women in the state.