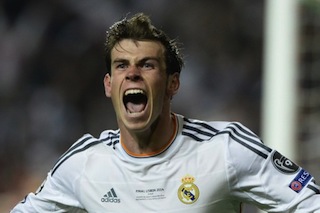 Gareth Bale: knocked out by injury

Gareth Bale scored a late winner from the penalty spot after Cristiano Ronaldo had been sent off as Real Madrid came from behind to beat Cordoba 2-1 on Saturday.

Madrid got off to the worst possible start when Sergio Ramos handled inside his own area and Nabil Ghilas slotted home the resultant penalty.

Karim Benzema levelled from James Rodriguez’s corner midway through the first-half, but Ronaldo’s frustration at a poor performance by the European champions seemed to have cost his side the chance of victory when he lashed out at Edimar seven minutes from time.

However, the numbers were levelled up when Fede Cartabia was shown a second yellow card for handling Bale’s free-kick inside the area, and in Ronaldo’s absence, the Welshman took responsibility from the spot to send Madrid four points clear at the top of La Liga.

Cordoba had given their survival hopes a huge boost with seven points from their previous three games and the enthusiasm generated by Madrid’s first visit in 44 years ensured there was a full house at the Nuevo Arcangel.

The home fans had plenty to cheer within the first two minutes as Manchester United reject Bebe saw his shot cannon off Ramos’s arm and referee Alejandro Jose Hernandez pointed to the spot.

Ghilas had been left out of the Algerian squad for the African Cup of Nations, but his country’s loss has been Corboba’s gain as he fired home his second goal in three games from the spot.

Bebe was making just his third appearance for Cordoba on loan from Benfica, but he was a constant threat in the first 45 minutes and was inches away from doubling the hosts’ lead with a shot across goal that sneaked just wide.

Slowly, though, Madrid began to find their feet and drew level on 27 minutes when Rodriguez’s corner was flicked on by Bale and Benzema slammed home his 15th goal of the season from close range.

However, Cordoba will rue not making the most of a host of opportunities to seal a famous win after the break.

Cartabia was desperately unlucky to see his shot from the edge of the area fly just wide before a scintillating run by Bebe took him past a host of Madrid defenders but his weak shot was easily held by Casillas.

The best chance of all fell to Florin Andone when he pounced on a poor header by Raphael Varane, but Casillas did just enough to turn his attempted lob on to the bar.

Madrid rallied in the final 15 minutes, but were still restricted to efforts from outside the area as Juan Carlos got down well to stop fierce efforts from Toni Kroos and Benzema.

Ronaldo’s frustrations then boiled over when he was rightly dismissed for kicking out at Edimar.

Yet, Carlo Ancelotti’s men still managed to grind out a vital victory when Bale made no mistake from the spot after Cartabia clearly handled his initial free-kick.