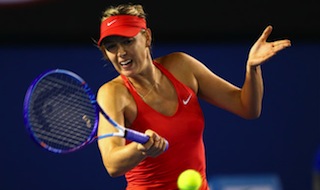 Maria Sharapova was all business as she raced into the Australian Open quarter-finals on Sunday to set up a glamour showdown with Eugenie Bouchard, as Rafael Nadal continued his unrelenting Grand Slam march.

The Russian world number two ended Chinese hopes by swatting aside 21st seed Peng Shuai 6-3, 6-0 as she lifts her game the deeper she gets in the tournament.

It hands organisers a dream last eight clash between two of the most marketable players on tour with Canadian seventh seed Bouchard surviving a mid-match slump to defeat unseeded Irina-Camelia Begu of Romania in three sets.

Nadal, a 14-time Grand Slam champion, was dominant after a tight first set against power-hitting South African Kevin Anderson, running out a 7-5, 6-1, 6-4 winner and will next play Czech Tomas Berdych for a place in the semi-finals.

The consistent Berdych, who made the final four last year, ended Australian Bernard Tomic’s tournament with a comfortable 6-2, 7-6 (7/3), 6-2 hit-out.

“After a tough period of time for me it’s a fantastic result and I’m very happy with the way I played today,” said Spain’s Nadal, who came into the tournament after a three-month injury layoff.

“It was probably my best match here this year so that’s very important for me and very special.”

Berdych admitted he would have to be at the top of his game to beat Nadal.

“I’m going to have to sit down with my team and prepare the right tactics,” he said

“Whatever I need to do I’m going to be ready for it and will try to fight until the last point.”

Sharapova, gunning for a sixth Grand Slam title and her first in Australia since 2008, said her match against Peng was tougher than the score suggested.

“I’ve always had a little trouble against Peng Shuai, she’s a really tough competitor,” she said.

The Russian added that Bouchard, the tour’s most consistent performer at Grand Slams last year who pushed her in their French Open semi-final, would be another big challenge.

“She’s been playing incredibly well, confident aggressive tennis. I have a tough match ahead of me.”

The popular Bouchard is widely seen as a future major champion after her semi-final appearance at Melbourne Park last year, a feat she matched in Paris before making the Wimbledon final.

She was disappointed by her mini slump.

“I learned a lot from it and I’ll try to make sure it doesn’t happen next time,” she said.

Bouchard has met Sharapova three times before and lost each one, a statistic that doesn’t sit well with her.

“I think I’ve progressed a lot since then and I definitely want to keep playing my game no matter what,” she said.

“Really take it to her, go for my shots. That’s what I want to do on the court. And it’s more fun when I play that way too.”

She is yet to drop a set and will next play the winner of the night match between third seeded Romanian Simona Halep and unseeded Belgian Yanina Wickmayer.

It is the third time the 26-year-old has made the quarters in Melbourne after strong runs in 2012 and 2013. She also appeared in the last 16 in 2014 and in 2011, making the Australian Open her most consistent major.

“I don’t know what it is, something special for me, but I’m really happy to be here,” she said.