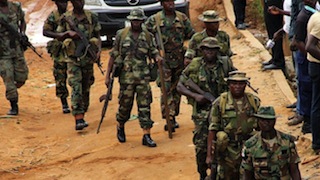 Nigerian troops appeared to have repelled Sunday morning assault on Maiduguri by Boko Haram fighters as the Defence Headquarters in an update said troops are in pursuit of ‘retreating’ terrorists.

It also announced a curfew on Maiduguri with immediate effect and until further notice.

There was no update yet on the situation in Monguno.

The two Borno towns were simultaneously attacked by Boko Haram fighters this morning, less than 24 hours after President Goodluck Jonathan held his re-election rally in Maiduguri.

Maiduguri had been calm for more than two weeks with no incident recorded, until today when the terrorists struck again in Jimtilo area of the town. Residents fled the area, according to reports.