2015: Anyone who says Jonathan will not win is sick, says Anenih 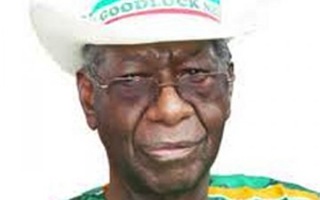 Chairman, Board of Trustees (BoT) of the Peoples Democratic Party (PDP), Chief Tony Anenih, has said that anyone who says that President Jonathan will not win the February 14 presidential election in Nigeria is “sick”. He noted that it would be a sad tale for any state in the South-South region to vote for APC candidates, whether in the Houses of Assembly, House of Representatives, Senate , Governorship or Presidential elections, saying it will be “taking food from your son to a dog.”

Anenih who spoke while addressing a campaign rally of the Peoples Democratic Party (PDP), ‎at the weekend in Uromi, headquarters of Esan North–East local government area of Edo State, said no one should be deceived that President Jonathan will loose the election, adding that, Jonathan will win the 14 February Presidential election by a wide margin.
‎
“Don’t be deceived if anyone tells you Jonathan will not win, that person is sick. I wanted to see things for myself. Four days ago, I was in Kwara State. As I was leaving after sitting for five hours, I knew that we have got Kwara.
‎
“Two days ago as Buhari was landing in Sokoto, I was also landing in Sokoto; and as he was leaving, I was also leaving, but at the time I was leaving, I knew we have got Sokoto state. These are Northern states.

“Coming back home, it will be a sad tale for any member of the South-South region to vote for APC candidates whether in the Houses of Assembly, Reps, Senate , Governorship or Presidential. It will be so bad; you are taking food from your son to a dog,” Anenih said.

The PDP Board of Trustees Chairman also blamed the military junta headed by the APC Presidential candidate, Major-General Muhammadu Buhari (rtd), for what befell late Prof. Ambrose Alli, first civilian governor of Edo state who died on his 60th birthday shortly after his release from prison.

Anenih narrated his prison experience with the late Prof. Alli at the Kirikiri Prison, Lagos where both of them were taken shortly after the 31st December, 1983 coup, to the party supporters. He spoke of how Alli underwent a surgical operation at Bonny Camp in Lagos, shortly after Alli’s daughter, Rosemary addressed the rally.

“There is something the daughter of Alli did not tell you; incidentally, Prof. Ambrose Alli and I were in Kirikiri prison. When they operated on Alli at the Bonny Camp Military Hospital, late General Idiagbon said that he should be moved to Jos.

“The military governor then said, no, he cannot travel. Idiagbon brought a Brig- General to sign an undertaking that the military would take responsibility for him to be taken to Jos. He was moved on a stretcher. Oh’ that is Buhari and you want this man to come back?,” he asked the crowd rhetorically.

Earlier while addressing the rally, Ms Rosemary Alli had explained to party faithful that the health problem of her father started when he fell from the double bunker in a cell where he was kept at the prison and was denied medical attention despite her pleas.