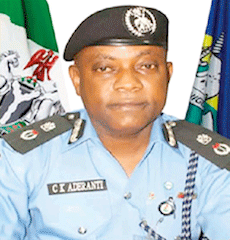 Aderanti gave the warning during interaction with journalists at the State Police Command Headquarters, Ikeja, Lagos.

He said the police are working day and night to prevent violence before, during and after the general elections in the state.

He observed that there have been cases of election violence in some parts of the state which he described as unfortunate and unnecessary, warning the perpetrators to desist from that or they would be arrested and prosecuted.

Aderanti said that the duty of the police in every society is to maintain law and order, stressing that the police in Lagos have been working hard to ensure that there is always peace and order in the state.

On the preparation for the coming elections, he explained that the command has been meeting with political party leaders and stakeholders to sensitise them on the need to maintain peace before and after elections.

“We have engaged party leaders and stakeholders at several meetings, talking to them about the need for peace at this election period and with their assurance, there will be peace in the state,” he said.

He said anybody that causes trouble irrespective of party affiliation was on his own and would face the consequences of his or her action.