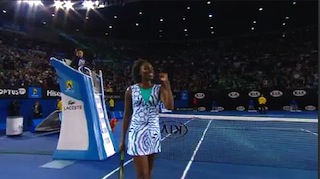 Serena Williams and sister Venus displayed all their fighting qualities to stay alive at the Australian Open Monday along with defending champion Stan Wawrinka, but two-time champion Victoria Azarenka was knocked out.

World number one Serena battled back from a set down in a tense match against Spain’s Garbine Muguruza to win 2-6, 6-3, 6-2 and make the quarter-finals, staying on track for a 19th Grand Slam title and her sixth at Melbourne.

“I didn’t start out so well and she did everything she needed to do in the first set,” said Williams, who can lose her top ranking if she exits and Maria Sharapova wins the tournament.

“I just decided to do my best, stay focused and relax. I think I’ve been playing for a long time. When I have to go up a level, I have to.”

Williams was coughing throughout the contest and confessed that “I’ve been a little sick in the last couple of days”.

She will next face last year’s finalist Dominika Cibulkova, the 11th seeded Slovak, who ended the comeback from injury of Azarenka in three tight sets.

Elder sister Venus’ late-career renaissance gathered pace as she rolled back the years to thump Polish sixth seed Agnieszka Radwanska 6-3, 2-6, 6-1. She is now 9-0 for the season after winning the Auckland Classic.

It is the 34-year-old seven-time Grand Slam champion’s first major quarter since the 2010 US Open, having been diagnosed with the energy-sapping Sjogren’s Syndrome in 2011.

“The first set wasn’t easy, in the second she just started to play better, in the third I think I went into a trance. I just wanted to win,” she said.

He will now play Japanese superstar Kei Nishikori, who was a class above dogged Spanish baseliner David Ferrer, easing through 6-3, 6-3, 6-3.

“He’s a tough, tough player. He improved a lot last year,” Wawrinka said of Nishikori. “He’s a great shotmaker, he can make winners. He doesn’t give you a lot of time.”

The unseeded world number 35, just 19, has long been touted as the rising star of American tennis and will next play Venus Williams, the 18th seed.

Venus has been keeping tabs on Keys’ progress for years and noted that “she started watching me when she was in diapers”.

Cibulkova, who lost in the 2014 title decider to Li Na, went into her match as an underdog against Azarenka, who had beaten her seven times in their nine previous meetings.

But she said her self-belief blossomed as she stepped back onto Rod Laver Arena, the scene of her best Grand Slam performance.

“I just walked on the court and all the memories came to my mind and I was just thinking ‘I’m a great player, I can do it, I just have to believe in myself’,” she said after the fiercly-contested match.

Despite her disappointment Azarenka said she was content with what she had achieved so far on the comeback trail, including a defeat of eighth seed Caroline Wozniacki in round two.

“I take it as progress. I think there are a lot of the positive things to take from here,” said Azarenka, who won the Melbourne title in 2012 and 2013 but struggled with a string of foot injuries and bouts of depression last year.

“It’s a good start. There was some good quality of tennis today, even though the result is not the one that I wanted and not what I was looking for.”