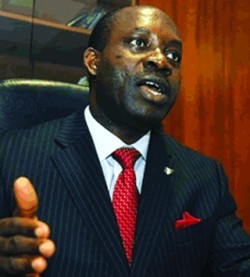 Professor Charles Soludo, a former Governor of Central Bank of Nigeria and one of the key managers of the Nigerian economy under former President Olusegun Obasanjo on Sunday advised President Goodluck Jonathan not to campaign on his six years record in office as he had failed Nigerians.

In a widely circulated write up on Sunday, the former CBN Governor said the Jonathan administration has failed to take advantage of high oil prices enjoined for the greater part of his time in office to improve the economy and the lot of Nigerians, scoring ‘F9’ in the economic sector.

While disagreeing with those who said President Jonathan had outperformed all his predecessors, Soludo said President Jonathan’s record, especially as in regard to the management of the economy when measured by variables like income (GDP growth rate), stability of prices (inflation and exchange rate), unemployment rate, poverty rate, etc is actually worse than that of former President Obasanjo.

“My advice to President Jonathan and his handlers is to stop wasting their time trying to campaign on his job record. Those who have decided to vote for him will not do so because he has taken Nigeria to the moon. His record on the economy is a clear ‘F’ grade.

“I can clearly see why reasonable people are worried. Everywhere else in the world, government performance on the economy is measured by some outcome variables such as: income (GDP growth rate), stability of prices (inflation and exchange rate), unemployment rate, poverty rate, etc. On all these scores, this government has performed worse than its immediate predecessor— Obasanjo regime.

“If we appropriately adjust for oil income and debt, then this government is the worst in our history on the economy. All statistics are from the National Bureau of Statistics.”

Going into specifics, the former CBN Governor noted that despite presiding over the biggest oil boom in Nigeria’s history, the Jonathan administration failed to add even one percentage point to the growth rate of GDP compared to the Obasanjo regime especially the 2003- 07 period.

“Obasanjo met GDP growth rate at 2% but averaged 7% within 2003- 07. The current government has been stuck at 6% despite an unprecedented oil boom. Income (GDP) growth has actually performed worse, and poverty escalated,” he added even as he claimed that the Jonathan administration is the only government in Nigeria’s history where rapidly increasing government expenditure was associated with increasing poverty.

“The director general of NBS stated in his written press conference address in 2011 that about 112 million Nigerians were living in poverty. Is this the record to defend?”  Soludo noted that while President Barack Obama of the United States had a tough time in his re-election in 2012 because unemployment reached 8%, the unemployment in Nigeria currently under Jonathan is at “a record 24% and poverty at an all-time 71% but people are prancing around, gloating about ‘performance’.

“As I write, the Naira exchange rate to the dollar is N210 at the parallel market. What a historic performance! Please save your breathe and save us the embarrassment.”

Soludo also added that Jonathan’s economic team led by Dr. Ngozi Okonjo-Iweala is “very weak, dominated by self-interested and self-conflicted group of traders and businessmen, and so-called economic team meetings have been nothing but showbiz time.”

According to him, some cabals have taken over the commanding heights of the Nigerian economy. “The very people government exists to regulate have seized the levers of government as policymakers and most government institutions have largely been “privatized’ to them.

“Mention any major government department or agency and someone will tell you whom it has been ‘allocated’ to, and the person subsequently nominates his minion to occupy the seat. “What do you then expect? The economy seems to be on auto pilot, with confusion as to who is in charge, and government largely as a constraint. There are no big ideas, and it is difficult to see where economic policy is headed to,” said the former CBN Governor who added that if properly managed, Nigeria’s economy  should have been growing at an annual rate of about 12% given the oil boom, and poverty and unemployment should have fallen dramatically over the last five years.

“The economy roared to average yearly growth of 7% between 2003 and 2007 (although average monthly oil price under his regime was $38), and poverty dropped from estimated 70% in1999 to 54% in 2004. “Obasanjo was his own coordinating minister of the economy and chairman of the economic management team— which he chaired for 90 minutes every week. I met with him daily. In other words, he did not outsource economic management.

“We expected that the next government after Obasanjo would take the economy to the next level. So far, we have had two great slogans: the 7-point agenda and currently, the transformation agenda. They remain empty slogans without content or direction,” said the former CBN Governor.

He also accused the presidential candidates of APC and President Jonathan of promising Nigerians what they cannot deliver because of the reduction in the revenue accruing to the country as a result of the fall in oil price.

Soludo tasked the two leading presidential candidates to come up with financing plans for the various welfare programmes they have been promising Nigerians on their campaign trails ahead of the 2015 elections.