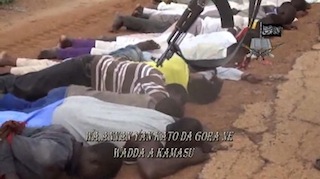 Men being executed by members of Boko Haram
Photo: AFP

Scores of people have been killed and many others forced to flee to the mountains following a renewed series of Boko Haram raids in northeast Nigeria, a lawmaker and a relief agency official said Tuesday.

The reported attacks by the Islamists targeted the Michika area in northeastern Adamawa state, where bodies reportedly littered the streets in several villages.

The bloodshed in northeast Nigeria has reached unprecedented levels in recent weeks, raising questions about security for general elections set for February 14.

The head of a European Union election monitoring mission, Santiago Fisas, said staff deployed to observe polling in Africa’s most populous country would not even attempt to travel to the northeast.

Separately, police in the northeastern town of Potiskum said they had arrested a bomb-maker linked to several recent Boko Haram suicide attacks — a welcome development for Nigeria’s security services which have struggled to protect civilians.

Adamu Kamale, who represents the Michika district in the Adamawa state government, also in the northeast, said Boko Haram gunmen had been going “door-to-door, killing people, including the old” for the past two weeks.

It was not immediately clear what sparked the latest alleged atrocities.

The insurgents, who are blamed for more than 13,000 deaths since 2009, have been in control of Michika for roughly five months.

Women and children had been abducted and countless homes destroyed, according to Kamale, who said roughly 70 percent of the population had fled their homes.

Many had escaped to Adamawa’s capital Yola, where hundreds of thousands have previously sought refuge, while others have been hiding in the mountain range that borders Cameroon.

In other areas under Boko Haram’s control, however, the attacks had abated and Kamale struggled to understand that latest unrest.

“To us, it has gone beyond insurgency. Something very strange is taking place in Michika,” he said.

Mohammed Kanar, northeast coordinator for the National Emergency Management Agency, confirmed the raids in Michika, without discussing details of the violence.

“People are trapped in the mountains but they are inaccessible,” he told AFP. “The security situation is a challenge.”