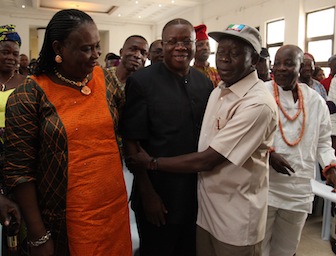 The gale of defection hitting the Peoples Democratic Party (PDP), across the nation on Wednesday swept through Edo state with the defection of the national president, Goodluck-for-Transformation and state Women Coordinator, Goodluck Campaign Organisation, Edo state, Chief (Mrs) Evelyn Igbafe and over 5000 others who dumped the party for the All Progressives Congress (APC).

Among other notable members from the PDP who abandoned the umbrella for the broom in the state were three-time member of the House of Representatives and Senatorial aspirant of the PDP in Edo South, Hon Ehiogie West-Idahosa and a former Commissioner in the old Bendel State and a founding member of the PDP, Hon. Roland Ehigiamusoe.

Chief Igbafe who was received to the APC by Governor Adams Oshiomhole, said she was merely on sabbatical before, but she is now fully back to the party where her heart truly belongs.

“I am back here, to my home. I have gone on sabbaticals, but I am now back home.”

She disclosed to the governor that many people are disenchanted with the PDP and “are on their way to the APC”.

To former national leader and founding member of the PDP, Hon. Roland Ehigiamusoe, the party is a sinking ship which is under the grip of a single man.

” have been a member of the PDP right from inception when it was formed on August 30, 1998. I have been there since and I have witnessed a lot of things.

“I am not surprised today that the PDP is sinking and sinking very fast because for quite a long time, it has been working for self-destruction. There are a lot of injustices in that party. That is why over two years now, I have been working behind the scene for the All Progressive Congress because of the great things that the governor has been doing and has done for us.

“Many of you think that the greatest thing that Comrade Adams Oshiomhole has done for us is tarring roads, building schools and infrastructure. Yes, that has been a revolution, very unique but the greatest thing he did for us was to free all of us from one man’s prison. We have all been in one man’s prison in Uromi since that 1998 and he came and in a wonderful way to freed all of us,” he said.

He further disclosed to the governor that, “I have been a gubernatorial aspirant, I have participated in many activities in the party and I found that there was nothing we could do unless you are given the opportunity by one man and so when you came with the one man, one vote, you freed all of us from the prison at Uromi, so I want to say thank you our Comrade Governor.”

On his part, three-time member of the House of Representatives, Hon Ehiogie West-Idahosa, said he joined the APC to propagate the message of ‘Change’.

“We went for a race, we lost not just the race, we lost a human being and we feel very pained that had we been here in APC, our safety would have been guaranteed.

“Many said to me, West, are you sure you can make it there? Are you sure that you are in the right place? Today, my position is clear. We are all supporters of change and for me, I believe in those values you represent, you (Oshiomhole) want water, light, good schools, good roads and the best standard of living for our people. Everything you want for our people is to add value to life and as far as we are concerned, we are here to support you and to mobilize the people to join you in pursuing the mandate of 2015 and after that mandate, Change will come to the nation,” Idahosa said.

Receiving the defectors, Governor Oshiomhole said, ‎”when, I saw the number of people here, I wondered if there is anybody of note that is left under the umbrella that is now severely tattered. I want to join my chairman in expressing my joy at the opportunity of being able to receive you back to the house that I believe is traditionally yours.

“I have argued this at the beginning and I will like to repeat it that I am convinced as our democracy matures, there are two forces in most democracy – the conservative forces that is dedicated to preserve the privileges of the few and the progressive forces that want an egalitarian society, a country that offers hope and opportunity to all its citizens and the political environment in which people can realize their potentials even if they do not have god fathers.

“Today is not just the fact of the huge number in this hall but it is also about the quality of the brains that have now joined us and in a world that is knowledge-driven, it is only the party that can parade the best brains that can drive the sustainable change that Nigeria is currently battling with in order to bail our people from its present political quagmire.”

Oshiomhole added that: “I think the main issues are clear now to many of our people and I have had several platforms to canvass these issues in the past few weeks. In this hall and outside, there are people who are not even members of any political party who cannot understand how and why 16 years of PDP federal government, Nigeria is still in the dark.

“The man who has a shop must close by 6:00 p.m. If he operates beyond 6:00 p.m., he must put on a generator, and buy petrol or diesel. For 16 years, PDP can’t give us light. But if they were to leave us in peace even in the dark, it will be bad enough but for them, that is not bad enough.

“Every day, people are protesting across Edo against PDP-approved policies where people who are in the dark for months are asked to pay what they call fixed charge without fixed light because even from the poor, they must extort money.

“Nigeria has been reduced to a Banana Republic as if there is no government in the land. People have no one to complain to because these economic vultures that are feasting and sucking the blood of the poor have protection in Abuja.”