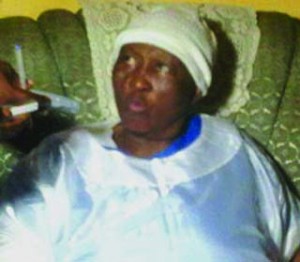 A 69-year old widow has narrated how she lost her six children within four years after the death of her husband in Lagos State, southwest Nigeria.

The late Eyitayomioluwa, 40, was a well known member of the All Progressives Congress, APC, in Agege before his untimely death.

Some alleged that he was shot from the roof of a hotel in the area while others claimed that he was shot by the police who were trying to restore order during a fracas  between supporters of the Peoples Democratic Party and the APC at a centre designated for the collection of permanent voter cards.

Both parties and the police have denied their involvement in his death.

Mrs. Peter called on the police and the Lagos State government to investigate the matter and bring the perpetrators of the act to justice.

She said she was making the appeal because the police appeared to have abandoned investgation into his death.

Also calling for investigation into the death of Abuna, the Campaign for Constitutionalism and Human Rights, CCHR and Agege Community Movement, ACOM in conjuction with the family appealed to the police to arrest and prosecute the culprits.

The deceased will be buried on 29 January, according to family sources.

Mrs. Peter told P.M.NEWS further that she had hoped the deceased would take care of her in her old age.

She disclosed that death strode into her family  in 2011 when her eldest daughter returned from the United Kingdom to take her younger sister abroad.

She said two of them died mysteriously in their family house at 3, Olajumoke Street, School Bus Stop, Iba, Lagos.

She said her only surviving son, Eyitayomioluwa died last week through a gun shot by an unidentified gunman.