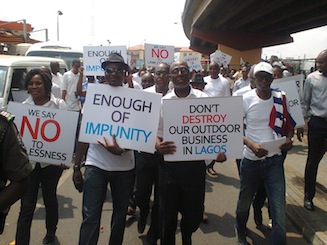 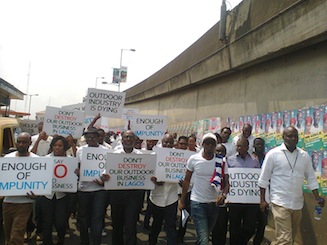 Thousands of outdoor advertising practitioners and officials of the Lagos State Government have protested the ban on billboard and pole adverts by the Federal Government on federal Roads in Lagos State.

The protesters staged the protest walk from Ikeja under the bridge down to Maryland, Lagos, Southwest Nigeria to express their grievances over the federal government’s move to ban them from placing outdoor adverts on federal roads.

The protesters were carrying placards some of which read: “Outdoor industry is dying,” “Enough is enough,” “Enough of impunity,” “No to intimidation,” “We say no to lawlessness,” “Don’t destroy: The law must be obeyed,” among others.

The protesters were lead by the Managing Director, Lagos State Signage and Advertisement Agency, LASAA, George Noah, in company of other leaders of outdoor advertising agencies.

With their banners, they decried what they described as “illegalities, impunity, intimidation and disrespect for rule of law,” by politicians. They said, is the “impunity” is now being perpetrated by members of the Peoples Democratic Party (PDP) who allegedly removed legitimate banners to replace same with those of their candidates.

According to Noah, the protest was to condemn the reign of impunity that is ongoing, especially by the PDP, describing it as illegal and inconsiderate on the group just doing their honest day job.
He said the people of Lagos State must recognise that the law gave LASAA the authority to control and regulate outdoor businesses in the State, adding that they shall therefore continue to fight for the right of all practitioners and stakeholders in the outdoor business.

“We are telling them that you cannot come to Lagos State with impunity and disturb business of honest hardworking men and women, who toil day and night to ensure that they make a decent living. We are telling them that Lagosians are watching them. They think that in the name of electioneering, they can come, cheat people and break the law because they want people’s vote. Lagosians are watching them and they can decide. Today, outdoor advertisers say no to impunity,” he stated.

Noah added that the PDP loyalists and men of the Federal Task Force had been busy mounting posters on streetlight poles already paid for by some companies, saying that some companies like Globalcom and Huawei, the Chinese telecoms giant, had cancelled their contract on Third Mainland Bridge stretch, bringing the total loss to about N350 million.

He said LASAA has begun legal action against the PDP, stressing that there was never a time the ruling party had consulting the agency for advert space, as their action amounted to gross impunity to just take posters and banners to the streets and on lap poles erected and maintained by the State government without permission.

“It is bad business. At a time we in this country are trying to attract foreign investments, we are sending bad signals to foreign investors because we are telling them that even if you sign contract, a government or political party can come and decide against it. That is the dangerous signal we are sending,” he said.

Executive Director, Centre for Rights and Grassroots Initiative (CRGI), Nelson Ekujumi said they decided to join in the protest because of their believe in the rule of law, saying they were in support of LASAA against pasting of illegal political posters because LASAA being a creation of law is still operating within its mandate.

“LASAA is a creation of law of Lagos State which is within the jurisdiction of the Federal Republic of Nigeria. In essence, anyone doing business in Lagos must abide by the laws of the state. We are disappointed that the Nigeria Police can join in the fray to threaten LASAA and thereby threaten the fundamental and economic rights of Nigerians,” he said.