Buhari Promises To Compensate Lagos For Years Of FG Neglect 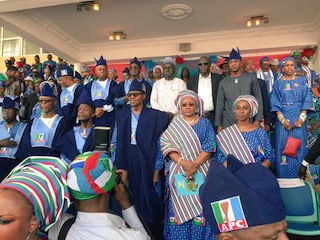 The All Progressive Congress, APC, Presidential candidate, General Muhammed Buhari has promised to compensate Lagos for the years of neglect by the Federal Government as a former Federal Capital Territory.

Buhari spoke when he visited the Oba of Lagos, Rilwan Akiolu and during his campaign at the Teslim Balogun Stadium, Surulere, Lagos, Southwest Nigeria today.

He said he would improve infrastructure in Lagos, lamenting that, the Federal Government had left Lagos alone to cater for all its responsibilities

“The state was left with enormous decayed infrastructure which should have been for their own interest. Lagos state has been keeping and maintaining them, but the federal government hasn’t been sympathetic enough to take the responsibility of what they left behind.

“We assure you that the APC will study this situation and make as much compensation as possible to Lagos state,” he said, adding that his government, if voted in, would try to complete the Lagos-Ibadan Expressway to Ilorin.

Buhari stated that a lot of noise was being made about Nigeria Airways, but decried that there was nothing on ground, adding that, these were some of the problems identified by the APC, such as insecurity, economy and corruption.

“The monies we retrieve from corruption will be adequately employed to make sure we make education improve. One of the legacies we can leave for this generation is good education, if that is done, most people will look after themselves,” he added.

The former Head of State lamented that the experience of the last 16 years had not been pleasant as it was bedevilled by insecurity, economic imbalance and unparallel corruption, which had virtually denied Nigeria the opportunity to improve other social services like education and healthcare.

“Infrastructure ‎is another structure that helps to bring industries back, employment of goods and services. APC has studied these problems in depth and priority is on security-from Maiduguri to Sokoto to Akwa Ibom and to Port Harcourt. We just have to get the security of this country right so that people can come out day and night and work hard to earn a living and correct the ills of the society.

“Our biggest problem, second to security is the unemployment of able bodied youths who are more than 60 per cent of the population of this country and we believe the biggest innovation through which we can tackle it is through farming, fishing, mining that will quickly provide avenue for a lot of youths to get employment,” he explained.

On the issue of industry, Buhari noted that nothing could be done without power, disclosing that the money spent on power between 1999 till now was more than $20billion but that the amount of megawatts had hardly changed as it is still between 3,000 to 4,000 megawatts.

“Now, this lack of accountability has acted very negatively ‎on the economy and the security of the country,” he said.

Oba of Lagos, Akiolu said since the dawn of the present civilian regime in 1979, the entity called Lagos has suffered tremendous tribulations from the Federal Government and that this was championed by “the man who is now putting hole in the umbrella which he brought. God knows everything. In 2011, I told Buhari certain things. But God knows the best for this country.”

Speaking at the rally, Governor Babatunde Fashola said Lagos is working because the Peoples Democratic Party, PDP, is not in power in the state, saying that in 2011, Jonathan came to Lagos state and promised that he would build the Murtala Muhammed Road and never did.

He also said the Red Line of the Light rail system is still hanging because the Federal Government had refused to approve the take off of the project for two years now.

Fashola said if Buhari wins, he would solve the nuisance in Apapa and ensure that tankers did not queue endlessly in the axis as he would repair the refineries in the country.

He added that the proposed Lekki Seaport was being hindered because the Federal Government had refused to pay its counterpart funding of $117 million, “yet, $20 billion is still missing.”

National leader of the APC, Asiwaju Bola Tinubu said Buhari was greatly needed at this time in the nation’s history to reshape things, saying that those saying he is too old should think twice as the late Nelson Mandela started ruling South Africa at the age of 73 years.

Tinubu stated that at a time America was experiencing economic depression, the nation brought in late Ronald Reagan at the age of 73 to rule America and that Winston Churchill who ruled Britain was older than Buhari, adding that, whether Buhari is qualified or not, the nation needed him at this period.