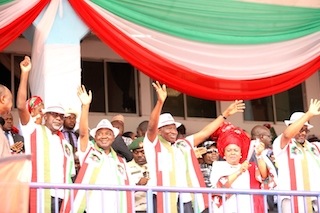 Governor Liyel Imoke of Cross River state in southern Nigeria has assured President Goodluck Jonathan that the state would give him 1.1 million votes in the February 14 polls.

Imoke made the promises on Friday during the Peoples Democratic Party (PDP) presidential rally in Calabar.

Imoke, who is the South-South Coordinator of the PDP Presidential Campaign Organisation, said the state would mobilise all its supporters to ensure that President Jonathan was re-elected.

He said that Jonathan deserved a second term in office due to his outstanding performance in his first term.

“We are giving you our total support because you have done well, and we are very confident that if given a second term you will do more.

“You have been able to deliver the dividends of democracy to Nigerians and we will give you 1.1 million votes from the state come Feb. 14.”

Also speaking, Sen. Benedict Ayade, the PDP Governorship Candidate in the state, also assured Jonathan of victory in the state.

“Come Feb. 14, we are going to deliver PDP 100 per cent in the state for the purpose of unity, progress and continuity of the present administration,” he said.

He urged those yet to collect their Permanent Voter Cards to do so, saying that it was the only tool to be used in re-electing Jonathan.