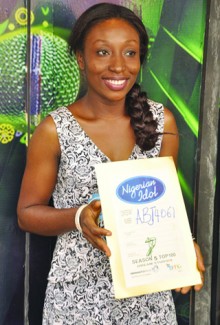 In a rare show of appreciation for exceptional talent, the three celebrity judges on the Nigerian Idol season five TV reality show, Dare ‘Art’ Alade, Yinka Davies and Dede Mabiaku, demonstrated their commitment to helping budding music talents realise their dreams when they offered to pay for the flight ticket of a contestant at the Abuja Auditions held at the weekend.

Twenty-four-years-old Ame Igiri had hoped for an opportunity to showcase her talent after failing to scale the first screening hurdle at the Port Harcourt audition a week earlier. Thankfully, a female friend saw her determination and undertook to sponsor her trip by road from Enugu where she has been residing since moving from Calabar, Cross River State four years ago.

Nigerian Idol is in its fifth season after a successful debut in 2010 won by Yeka Onka. It focuses on discovering Nigerian youths with talent in music and giving them a unique platform to take shots at stardom. The eventual winner goes home with N7.5 million cash reward, a brand new car, a recording deal worth N7.5 million and some high-end devices.

Auditions are expected to continue in Ibadan at Kakanfo Inn, Ring Road in the weekend of 31 January and 1 February. Lagos will host the last leg a week after at the Dream Studios, Omole 1.  Benin and Port Harcourt have had their audition rounds.