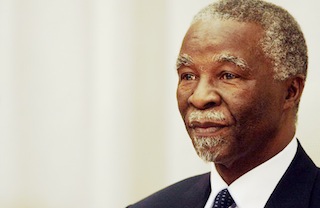 Former South Africa president, Thabo Mbeki, has been announced as the winner of the 2014 Obafemi Awolowo Prize For Leadership.

This was announced Friday 30 January morning by Chief Emeka Anyaoku, Chairman, Selection Committee of the Obafemi Awolowo Prize For Leadership.

According to the former Commonwealth secretary general, Mbeki in addition to being a renowned champion of Africa’s renaissance, he has in his distinguished career to date demonstrated many of the core leadership qualities that have been associated with Chief Obafemi Awolowo.

“It gives me immense pleasure to inform you that after an elaborate and rigorous screening process as well as very careful consideration, the selection committee came to the unanimous conclusion that of all nominees presented before it, former President Thabo Mbeki was adjudged to possess the attributes for the award,” Anyaoku said.

He added that Mbeki will be presented with the award at an elaborate ceremony on 6 March in Lagos.

The first edition of the award was held in 2013 with Nobel laureate, Professor Wole Soyinka as the winner.

Nominees for the leadership prize are expected to have demonstrated, to a substantial degree, the attributes considered to have characterized Chief Awolowo’s leadership style, which include integrity, credibility, discipline, courage, selfishness, accountability, tenacity of purpose, visionary and people-centred leadership, as well as respect for the rule of law and press freedom.