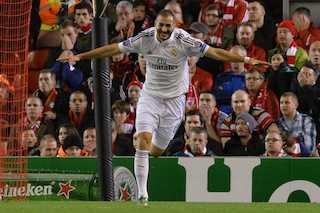 Real Madrid recovered from an awful start to move four points clear at the top of La Liga with a 4-1 win over Real Sociedad on Saturday.

With World Player of the Year Cristiano Ronaldo missing through suspension, Madrid were stunned in the first minute when Aritz Elustondo headed the visitors into a shock lead, but they were level almost instantly when James Rodriguez nodded home.

Sergio Ramos handed the hosts a deserved 2-1 lead at half-time before Karim Benzema scored twice after the break.

Champions Atletico Madrid overcame horrific conditions on a mud stained pitch to beat Eibar 3-1 away and move level with Barcelona in second. The Catalans aren’t in action until Sunday when they host Villarreal.

“It was a very quick goal but we knew how to react and turn the scoreline around. We need to keep improving but it was a deserved result,” said Ramos.

“After the start of the year we haven’t had a good run, but I would prefer it to happen now than at the end of the season. There is still a long way to go and we remain at the top.”

Sociedad boss David Moyes, meanwhile, admitted he was powerless in his attempts to narrow the gulf between the two sides.

“I think we came and tried to be brave on the ball,” said the Scotsman.

“We had a great start to the game, but you have to look at the difference in the quality in the two teams and squads.”

Moyes hadn’t lost to Real coach Carlo Ancelotti in six previous meetings when they were in charge of Everton and Chelsea respectively, and Sociedad had already shown their ability to upset the odds with victory over Madrid and Barcelona at home this season.

However, the Basques have yet to win away from home this season and their fragility was exposed just two minutes later when Rodriguez sneaked ahead of his marker to head Marcelo’s cross into the top corner.

The visitors then suffered a huge blow when top scorer Carlos Vela limped off after just 17 minutes and the Mexican’s absence sapped Sociedad of any attacking threat thereafter as the European champions pilled on the pressure.

Benzema and Rodriguez fired straight at Geronimo Rulli when well-placed inside the area, while Gareth Bale saw a header flash just wide.

Rulli denied Benzema again from a narrow angle eight minutes before the break, but the ball fell kindly for Ramos to rifle home his sixth goal of the season.

Bale missed a huge opportunity to make it three before the break as he took Benzema’s pass off the toes of Rodriguez, but somehow managed to fire wide of an open goal.

The Welshman didn’t take long to make amends, though, when he teed up Benzema for a simple tap in to put the game beyond Sociedad six minutes into the second period.

Bale was then denied by a goal-line clearance from Inigo Martinez with Rulli out of position.

However, there was no stopping Benzema 14 minutes from time as he exchanged passes with Isco before thrashing the ball high into the far corner for his 17th goal of the season.

There was some doubt whether the game at Ipurua between Eibar and Atletico would go ahead as heavy rain left the pitch at the 5,000-capacity ground in a terrible state.

However, Atletico adjusted the better and went in front after just seven minutes when the on-form Antoine Griezmann slotted home Raul Garcia’s pass.

Griezmann then teed up Mario Mandzukic to double Atletico’s lead before the Croatian slammed his second of the night two minutes later.

Federico Piovacarri registered a consolation for the hosts a minute from time.