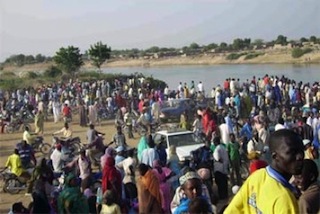 Thousands of Nigerian civilians who fled the armed Islamists of Boko Haram have become a headache for Chadian authorities after seeking safety on a multitude of scattered islands in Lake Chad.

“We waded through the water for several days and suffered so much,” recalled former taxi driver Adamou Bouba, who snatched up his toddlers, aged two and three, when Boko Haram fighters raided his village, Kiguili, and killed his wife.

After the deadly raid six months ago, Bouba, his children and their companions trekked north in fear of the jihadists to the dusty, windswept Lake Chad basin in the far northeast of Nigeria and bordering on western Chad.

Here, after miles of negotiating the waterways, they settled on Chad’s Ngouboua peninsula, a strip of dry land three hours from the nearest town by a bad road.

“There were 77 of us, but several people died on the way,” he said.

With Boko Haram trying to establish an Islamic caliphate across northeast Nigeria and even abroad, thousands of people steered clear of the road and took to the water any way they could in search of safety.

The luckier ones managed to grab places on overloaded canoes, but their only option was to reach the arid islands in Chadian territory, a few kilometres (miles) across the lake.

Bouba said that “we took five days to get here” without food and with no drinking water. When his family made dry land, Chadian soldiers “came to meet us”.

The waters extend into Cameroon and Niger in this remote frontier territory, but the lake has shrunk drastically since the 1960s, because of factors including overuse of resources and drought induced by global warming.

Scattered over tiny isles, families who frequently lost loved ones during the arduous trip now fend for themselves. Of some 17,000 Nigerians estimated to have fled to Chad, only 7,000 have been taken in to an established refugee camp, according to the UN High Commissioner for Refugees (UNHCR).

Working out what to do with the bulk of the recent arrivals is a big puzzle for authorities in Chad’s capital N’Djamena, after an unsuccessful initial bid to gather the refugees together at Ngouboua.

“Providing humanitarian assistance is extremely difficult in these conditions. How can we load food for several thousand people on small canoes?” asked Ahamat Asselek of the Chadian Red Cross.

In the shade of a tree, refugee Aminata was picking up driftwood. “Nobody gives us food, nor is there soap to wash our clothes,” she said, grateful for help from local people in a region where increasingly scarce resources can spark communal conflicts.

“Since we arrived, villagers have taken care of us. We women went to beg and they took pity on us, giving us rice, maize meal and oil,” added the young woman with silver eyeshadow beneath her black veil.

Some early Nigerian arrivals have integrated themselves into the community, sometimes sharing the language of the locals, and they get by with fishing and agriculture.

But plans are afoot to move everybody. Since January 23, relief workers have been transferring refugees to Baga Sola, where a new camp has been erected. It already houses almost 2,500 people.

The Chadian government decided on the move for “security reasons”, said Mamadou Dian Balde, deputy representative of the UNHCR in Chad.

“Ngouboua is only 18 kilometres (11 miles) from the border” and people who remain there face renewed Boko Haram threats, he added.

Some residents fear that the armed extremists will launch attacks inside Chad. Monitoring comings and goings on hundreds of islands and countless channels in the lake is a virtually impossible task.

“There are many rumours. People say that they have already attacked some lake villages close to Nigeria. In any event, they surely want revenge,” Balde said.

Chad’s army has started to deploy troops along the border to repel potential attacks by Boko Haram, whose insurgency has claimed more than 13,000 lives since 2009.

“It’s true that we can’t monitor everything, but the positions (of patrols and forward posts) at the frontier won’t let Boko Haram fighters through,” said the local representative of Chad’s national commission to help refugees, Mahamat Ali Tchari.

“The only risk of infiltration arises if they come disguised as refugees,” he added.

Several sources in humanitarian circles stated that a number of arrests have already been made at the Ngouboua, after suspects were denounced by refugees.

“Is it really a matter of Boko Haram members and accomplices, or just former neighbours settling old scores?” one of the sources asked. “It’s hard to say.”