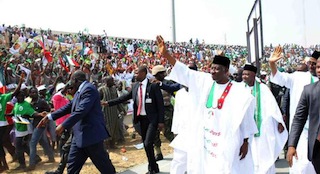 President Goodluck Jonathan on Saturday pledged to revive the textile industry sector in Nigeria to generate employment and boost the economy.

Jonathan made the pledge at the PDP presidential election rally held in Kaduna.

According to him, with improvement in power supply, he will work closely with farmers and manufacturers to ensure that the industries are back to life.

He said the special power project, being undertaken at Kudendan Industrial area of Kaduna metropolis, was part of the plans by his administration to provide steady power supply to aid in the resuscitation of industries in the state.

Jonathan told the crowd of party supporters that his administration had been fair and just to all sections of Nigeria, and would continue to offer credible leadership, if re-elected in the February election.

According to him, the president has undertaken various projects that will transform the economy of the region.

He said the most expensive project under the Federal Government, the Mambilla Dam, is cited In Taraba, and being constructed at the cost of more than N1.2 trillion.

Sambo said the N300 billion for the construction of the Zungeru power project had been provided by the government, while work on the Kaduna-Abuja standard rail line “is 100 per cent completed.

“Specifically, in Kaduna State we are determined to bring back the industries in the state by constructing the 215 megawatts power plant at Kudendan that will soon be completed.”

Addressing the rally, Sen. Ahmadu Ali, the Director-General, Goodluck/Sambo Campaign Organisation, called on the people of the North to wait for their turn in 2019, saying President Jonathan had delivered and deserved a second term.

He said the sacrifice by the region was necessary for Nigeria’s unity and solidarity.

Ali cautioned voters against electing APC Presidential Candidate, Gen. Muhammadu Buhari, saying doing so would be a return to dictatorship.

On his part, Gov. Sule Lamido of Jigawa, who directed his message to the youth, said the PDP was preparing them for a brighter future.

He advised them to shun politicians campaigning on the basis of religion and ethnicity, saying that the PDP had been fair and just to all Nigerians.

“Those campaigning on the basis of religion are hypocrates and liars who are out to deceive you.

“The history of modern leadership in the North before independence and after independence, during the late Sardauna, Alhaji Ahmadu Bello, was built on the basis of justice, fairness and equity.”

In his remarks, Senate President David Mark said the Federal Government under President Goodluck Jonathan was determined to ensure free and fair elections in the country.

He warned party members against complacency, saying: “We must not take things for granted during the election.

“We will not rig, and will not allow those who have made elaborate plans to rig. As party members, you must vote, protect your votes and ensure that it counts.”

Gov. Mukhtar Yero of Kaduna State hailed the accomplishment of the President Jonathan, saying that the state had benefited greatly from his Transformation Agenda.

He listed some of the projects to include the Kaduna-Abuja standard gauge rail line, the Gurara and Galma dams, electricity, water and irrigation projects.

“Take away sentiments, we have no choice in Kaduna State but to elect President Goodluck Jonathan in February.”