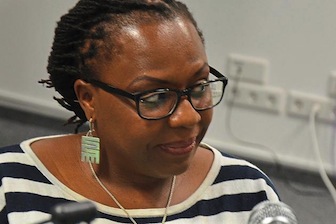 *Lola was 10 years old when the Buhari-Idiagbon regime incarcerated his father, a building contractor in Ogun state, for six months in 1984. His father is now a member of the APC and Lola herself now voices support for Buhari’s ambition to govern Nigeria again with personal steel and discipline

Possibly the worst year of my life was 1984. I was 10 years old and blissfully unaware of the changing face of Nigeria’s political landscape. And a rather unyielding face it was – that of Muhammadu Buhari who had recently overthrown Shehu Shagari, a democratically elected president. For Buhari, this was a necessary coup d’etat because Nigeria was being overrun by corrupt politicians. However, his regime would have a devastating impact on my family’s fortunes.

For the first time, at the close of the school term in Edinburgh, my father wasn’t there to pick us up. My older brother, aged 15, took charge and we made our way to Heathrow. Touching down in Nigeria, it was my mother who met us at the airport. She didn’t smile, perhaps couldn’t; her mouth was turned down at the corners like she was being flattened by existence. Something was wrong, clearly. I waited until we were settled in the car and piped up: “Where’s Daddy?” Without turning to glance at me, my mother answered: “He’s in jail.” She always had an aversion to bullshit but even, for her, that was pretty cold. For the rest of the journey, I thought about my Daddy who returned the cash to the phone company when our account was credited with thousands of naira; Daddy who, born into abject poverty, personified what it meant to work really hard and make your own dreams come true, in a hopefully new meritocratic Nigeria.

On getting home, one of my older brothers explained that Buhari’s deputy, the uncompromising, much-feared Colonel Tunde Idiagbon, had commanded that all government contractors in Ogun state had received a notice to appear before a special committee. My dad honoured the invitation and presented all the papers to show that it was in fact the government that owed his company money. He was given two options: to pay a large amount (that no one quite understood how they arrived at) or go to jail. On principle, my dad said he wasn’t going to pay money that he didn’t owe. He was not alone. I have a group of friends with whom I am forever bound by this shared ordeal of seeing our fathers treated like criminals. And as it was for many, this period signified the beginning of financial ruin.

My father spent six months in jail and came out a different man. For one, he started clapping at our solemn family devotion in the mornings, something we never did. He explained that that was what they did in prison. He was never a big talker but seeing him work at adjusting to normal life was painful for everyone around him.

Before his release, the two giant crushers and all the machinery and equipment that belonged to his civil engineering firm were liquidated. As children, our lives changed too. We were placed in state schools and said goodbye to our privileged lifestyles.

My dad is 87 now and he’s an active member of the local advisory board of the All Progressive party, the opposition party that has recently adopted Buhari as the presidential flag-bearer, 30 years after his first outing as a military head of state. Like many Nigerians, my father was saddened when he heard President Goodluck Jonathan claim that “stealing is not corruption”. With 24 per cent unemployment, there are limited opportunities for young people, making them easy fodder for militants in the southernmost parts of the country and dreaded religious fundamentalists in the north. People clamour for leadership.

For the last three weeks, I have been travelling with the presidential campaign team and I have had the opportunity to listen to people and interview them. I have also had a personal need to understand this man Buhari who has run for the highest office a record three times. At the beginning, I admit I had doubts and misgivings. It’s hard not to when you’ve been stung before. But after several conversations with him, I have come to understand what the mass hysteria is all about and why Nigerians would vote for this soft-spoken but highly principled 72-year-old.

It’s quite simple and, having worked as a schoolteacher for years, I can use a school setting in my analogy. Kids like a teacher to whom they can give the runaround but when it’s crunch time, they favour an environment where the teacher is firm, one where clear boundaries have been set. Having a president who is widely described as “clueless” may have seemed to many like an opportunity, but the goodwill that Jonathan enjoyed in 2011 has been frittered away. These days, governors in the opposition parties are starved of funds and harassed when they don’t do the bidding of a first lady who campaigns for her personal candidates. Many Nigerians believe that it is time to return to one of the few faces of anti-corruption in Nigeria’s political history. Even my wrongly-imprisoned Dad would recognise that Buhari’s ambition was to stem corruption.

Unlike many Nigerian past presidents, Major-General Buhari does not have a huge mansion. You won’t hear about him owning a bank or sitting on the board of banks. Neither does he own expansive farmland. In fact, he wrote to the minister of finance requesting that he only receive 10 per cent of the allowance that all past presidents receive on a monthly basis. Overwhelmingly, his lack of greed and personal venality means people trust him. Within a democratic dispensation, whatever excesses Buhari’s singlemindedness at tackling corruption might have shown 30 years ago can and will be curbed.

He has surrounded himself with a brilliant, savvy team of young Nigerians and I much enjoy the passion with which he talks about his three main priorities: unemployment, insecurity and education. For some Nigerians, he might not be an ideal candidate but for many more, people want anything but Jonathan. And even better it’s someone that they feel they can believe in.

*Lola Shoneyin is a Nigerian novelist and poet

This article was first published in the London Guardian on 31 January. Here is the link; http://www.theguardian.com/commentisfree/2015/jan/31/nigeria-elections-president-muhammadu-buhari-lola-shoneyin?CMP=share_btn_fb