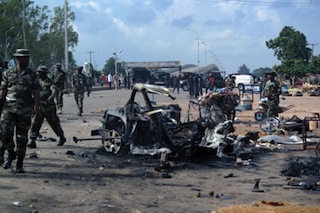 The first blast appeared to be a bomb attack at the Tsohuwar Kasuwa market that killed two people, according to one witness, Muktar Abbani, but the cause of the explosion was not immediately clear.

Moments later, a suicide bomber on a motorcycle blew himself up at a checkpoint in the Kasuwar Katako area, killing a soldier and two others, said another witness, Musa Badamasi, and a military source in the area who requested anonymity.