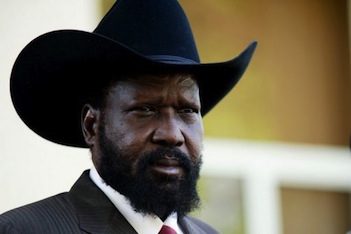 “Complete cessation of hostilities in South Sudan is expected as of this morning (Monday),” Seyoum Mesfin, a negotiator from the regional IGAD bloc, told reporters in the Ethiopian capital Addis Ababa where the ceasefire deal was signed.

The two leaders have signed –- and then broken –- at least six previous ceasefire agreements since fighting began in December 2013.

After four days of difficult negotiations in the Ethiopian capital, Kiir and Machar have however failed to reach agreement on the conflict settlement proposed by IGAD which provides for a power-sharing arrangement between the two men.

“This is a partial agreement because we have not solved some of the most critical issues,” Machar said after the signing, citing disagreements on the “transitional government structure” to set up and divide responsibilities within the administration.

Negotiations will resume on February 20 with IGAD giving the warring sides one last chance to reach a final agreement by March 5.

Fighting broke out in South Sudan, the world’s youngest nation, in December 2013 when Kiir accused his sacked deputy Machar of attempting a coup.

Clashes between a faction of the army loyal to Kiir and rebels loyal to Machar have since expanded throughout the country and left tens of thousands dead in a conflict which now involves 20 armed groups.

Kiir and Machar last met in November in Addis Ababa, where they agreed an immediate halt to the war, a deal broken within hours.

The fighting in the capital Juba set off a cycle of retaliatory massacres across the country, pushing it to the brink of famine.