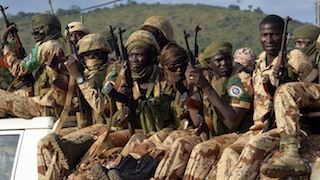 Chadian forces scored a key victory over Nigeria’s Boko Haram on Tuesday, wresting control of the border town of Gamboru within hours of launching a ground offensive against the jihadist group.

Around 2,000 Chadian troops backed by armoured vehicles crossed the border into Gamboru from the Cameroonian town of Fotokol after days of clashes with the insurgents.

By Tuesday evening, the troops had taken control of the town, according to an AFP journalist in Gamboru.

The residents and remaining fighters appeared to have fled.

No official death toll from the fighting was immediately available. A Chadian military source said eight Chadian soldiers were killed and around 20 injured.

The AFP journalist saw bodies lying on the ground.

“We have routed this group of terrorists,” the commander of the Chadian contingent Ahmat Dari told AFP, vowing to continue the fight against the insurgents “until the end”.

The ground intervention by Chad came after the African Union last week backed a regional five-nation, 7,500-strong force to take on the extremists amid growing fears about their threat to regional security.

Nigeria has drawn fierce criticism for failing to hold back the insurgents, who have stepped up their campaign of terror in country’s northeast in the run-up to presidential and parliamentary elections on February 14.

“Nigeria’s territorial integrity remains intact,” he defended, claiming national forces had “planned and are driving the present onslaught against terrorists from all fronts in Nigeria, not the Chadian forces”.

Chad’s intervention reflects the growing nervousness among Nigeria’s neighbours over the prospect of Boko Haram achieving its stated aim of carving out an Islamic caliphate on their borders.

The rebels have tried, in vain, to capture the strategic northeastern Nigerian town of Maiduguri twice in the past week.

On Monday, President Goodluck Jonathan — who is running for re-election against a former military ruler who has vowed to defeat Boko Haram — escaped a suspected suicide bomb attack after attending a campaign rally in Gombe in the northeast.

Eighteen people were reported injured in the attack believed to have been carried out by two female suicide bombers.

After days of airstrikes by Chadian war planes on Gamboru, Chadian forces crossed a bridge from the Cameroonian town of Fotokol to enter Gamboru.

The operation began with another barrage of airstrikes lasting about an hour.

“A contingent of about 400 vehicles and tanks is stationed between Mamori and Bosso,” Niger’s private radio Anfani reported.

The massing of troops in Niger was seen as pointing the way to an imminent attack on Malam Fatori, a town held by the Islamists on the Nigerian side of a river that separates the two countries.

France is supporting the operation by carrying out reconnaissance flights over border areas of Chad and Cameroon, both former colonies, defence officials in Paris told AFP.

In a speech in the French capital, President Francois Hollande suggested that the flights also encompassed Nigeria — but defence officials insisted that the planes only went as far as the border.

The US welcomed the stepped-up role played by es in trying to repulse the group, which gained global infamy when it abducted 276 girls from the town of Chibok in April, 2014.

At least 13,000 people have been killed and more than a million forced from their homes since Boko Haram launched an insurgency in 2009.

The sharp upsurge in violence in recent weeks is believed to be aimed at disrupting the upcoming elections.

N’Djamena was already part of a long-standing regional force with Niger and Nigeria in the Lake Chad area.

But that force had been assumed to be moribund after Boko Haram overran the multi-national base in Baga, northern Borno, on January 3, in an attack that also left hundreds of civilians feared dead.

Nigerian authorities had already claimed Monday to have reclaimed Gamboru, amongst other military successes against the insurgents.

A Chadian army officer had told AFP however the insurgents were “in the whole town, hiding in the houses, and they have posted snipers everywhere”.

On Sunday, Nigerian troops repelled a Boko Haram assault on the Borno state capital, Maiduguri, for the second time in a week.

The city, where Boko Haram was founded in 2002 and which is currently swollen by hundreds of thousands of refugees from the violence, is considered one of the few places where voting could feasibly take place on February 14.